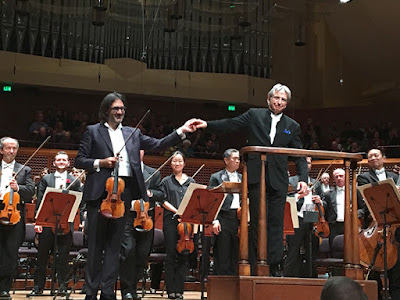 I attended the September 28 performance of the San Francisco Symphony, at Davies Symphony Hall, part of an ongoing Stravinsky Festival. MTT conducted Petruschka, The Rite of Spring, and the Violin Concerto. Leonidas Kavakos was the soloist in the concerto.

It was fun to hear Petruschka live for the first time, but I was more  interested in the rest of the program as this was my second time hearing the San Francisco Symphony doing each of the other two pieces. Back in 2013, I heard Leila Josefowicz play the Stravinsky concerto (my comments on that concert here) and heard The Rite of Spring just last summer, with Susanna Mälkki conducting (comments here). I was curious to hear these two pieces again and with MTT conducting.

I don't know what it is about MTT. I know he's popular. He's won multiple Grammy Awards. I just don't get the way he conducts. I thought The Rite of Spring oddly static in the first half. It's a piece that should be marching forward, relentlessly, and he managed to make it seem like it was standing still at times. I always feel a disconnect between him and the orchestra (with one notable exception, his brilliant reading of the Mahler Fifth Symphony I heard back in March this year). In the second half of The Rite of Spring, things finally seemed to be in gear and the audience was very appreciative, but this performance, while enjoyable, didn't leave me with anything of the excitement I felt hearing virtually the same musicians under Mälkki's baton back in June of 2017.

I felt kind of the same way about the concerto. The opening chord—the chord that opens each of the concerto's movements—seemed weak. It should come as a shock. I had never heard Kavakos play before or even heard his name, so I went into the concert with an open mind. After the initial chord, I was prepared to be disappointed, but, it got better. Again it took some time for the players and the conductor to convincingly join forces, or so it seemed to me. In the end, I liked Kavakos. That said, this performance didn't have the fire of the 2013 performance I attended with Josefowicz on the violin.
Posted by Colin Talcroft at 9:58 AM