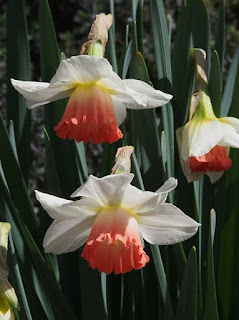 I belatedly report today that the first of the two-toned daffodils in the garden opened on March 4 this year. They typically open later than the yellow daffodils—and have done so this year nearly a month later. The yellow daffodils first bloomed on February 6 in 2019.