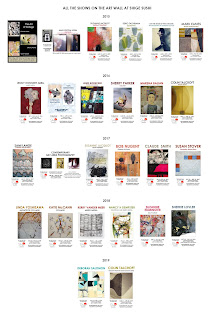 The Art Wall at Shige Sushi is no more. The restaurant owners have decided to permanently close the Cotati location to focus on their new location in Sonoma. It was a really fun four-plus years. As curator, I feel like I was able to show a great deal of really good local art in that time. I sincerely thank everyone who helped to make The Art Wall possible.


The first show was in December and January 2014-2015. Only one person came to the opening reception. It was pouring with rain, no one had heard of the place (except as a restaurant) and it was right before Christmas. In the end, that was a good thing. There would have been room for no more. We held the reception while the restaurant was open—a mistake in such a small space. I quickly learned to have the receptions on Mondays, when the restaurant was closed. I will always be grateful to Claude Smith and Sherrie Parker for agreeing to participate in the first show.

I curated 26 shows of 8 weeks each with a couple of exceptions—one was six weeks, one ten weeks. I showed the work of 28 artists, 27 living, one deceased (Lewis Bodecker). There were 23 solo shows, three group shows (collage work by Claude Smith, Sherrie Parker, and me; Lisa Beerntsen and Deborah Salomon had a show together, and we did a show of contemporary photography that included work by nine artists). Of the 23 solo artists, 17 or 74% were women. Several artists participated in more than one show, including Janis Crystal Lipzin, Sherrie Parker, Claude Smith, and Deborah Salomon.

We sold at least one piece in (or as a result of) seven of the shows, not including work I bought myself. Including that, we sold at least one piece in 11, or 42% of the shows. Katie McCann sold the most in one show, with three of her collages going to an enthusiastic collector. The most expensive piece sold was a piece in Sherrie Lovler’s show, which sold for over $800. As I took only a 25% commission on sales, The Art Wall at Shige Sushi was not a profitable venture in monetary terms. It would not have been possible at all if the owners at Shige Sushi had not allowed me to use the space at no cost. It was profitable in terms of other, more important things.


Please join us next Monday, April 8, 2019 for a final closing party from 6:00PM to 9:00PM. Everyone's invited. If you never made it to one of our shows, this will be your last chance. Wine and beer will be provided, but please bring a little something to eat to share with friends. Pot luck. Bring your own bottle, too, if you care to. But come, even if you come empty-handed. I'd really like to personally thank everyone who was involved—the artists and the art lovers—with making The Art Wall at Shige Sushi a success.

The photo above shows postcards for each of the 26 shows I curated, in chronological order.
Posted by Colin Talcroft at 12:27 PM