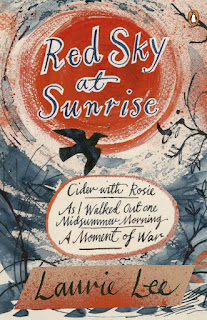 I wonder if Laurie Lee (1914-1997) is not better known in the US because his name sounds feminine. I imagine it confuses people to learn, if they ever do, that Laurie is a man, Laurie being short for Laurence in this case. It's the sort of thing the British are more at ease with than we are. It may also be that the British, on the whole, have better taste than we do and that they are better educated. Or is that an illusion? Whatever the case, our current president has shown what a fundamentally ignorant, insensitive, mean-spirited people we Americans are—on the whole. The writings of a man like Laurie Lee could never go mainstream here, but perhaps not anywhere. His writing is too pretty to go mainstream. His prose reads like poetry, often requiring the attention and concentration that poetry requires. It can be tiring—although never overwrought and burdensome like the prose of a D.H. Lawrence.

I thought this particularly so in the case of Cider with Rosie, one of the three autobiographical books (originally published separately) collected in this omnibus volume from Penguin (2004). Not surprisingly, Lee is best known as a poet aside from these books.

Cider with Rosie, memories of the author's childhood in the Cotswold countryside, originally appeared in 1959. It's a nostalgic remembrance of his early life in an isolated village before the First World War, before automobiles were common, before the encroachment of modernity. Lee writes beautifully of the countryside, life with his sisters, life with his distracted mother, life with his absent father—his experience of growing up there from the age of three (his first memories) until just before he steps out into the world on his own as a young man—by walking to London (a distance of about 110 miles) and then across Spain.

The opening is beautiful and memorable. He remembers the first time he was out of the house on his own, at age three.

I was set down from the carrier's cart at the age of three; and there with a sense of bewilderment and terror my life in the village began.

The June grass, amongst which I stood, was taller than I was, and I wept. I had never been so close to grass before. It towered above me and all around me, each blade tattooed with tiger-skins of sunlight. It was knife-edged, dark, and a wicked green, thick as a forest and alive with grasshoppers that chirped and chattered and leapt through the air like monkeys.

The prose throughout is as vivid.

The very idea of leaving home by spending several weeks to walk to London and then to walk across Spain (the subject of the second book, As I walked Out one Midsummer Morning, originally published in 1969) is alien in this age. A young American setting out on his or her own would rarely think to walk anywhere today, much less the distance from Scranton, Pennsylvania to New York City to look for work and independence from family. We are coddled and separated from the physical world by our computerized vehicles and computerized devices. Today, walking such a distance simply to get somewhere, or walking across a foreign country is reserved for the well-heeled tourist (always with money and privilege to fall back on in a pinch) or it's an act of defiance, a conscious attempt to return to some kind of ill-defined authenticity. Lee starts out in life by walking to London because he has no other way to go. Later, he walks across Spain, supporting himself by playing his violin in the streets, for much the same reason; he wants to go and he has no other conveyance. He is ill-prepared in both cases and nearly expires on several occasions from heat stroke in Spain, but the kindness of strangers and plain dumb luck save him. Lee at the end of the book ends up in jail and very narrowly escapes getting himself shot. His experience illustrates just how important happenstance often is in determining the path of an individual through life.

At the end of As I walked Out one Midsummer Morning, Lee is in a Spain on the brink of civil war. In the third and final book, A Moment of War (originally published in in 1991), he decides to go back to Spain (having once returned to England) with the idea that the Spanish Republicans deserve his help. Once again, hopelessly ill-prepared, he walks into Spain from France to join the cause, nearly freezing to death in the process. During his time in the Republican army he is met with suspicion and incompetence in a swirl of doomed enthusiasm among his peers that quickly deteriorates into a pool of squalid disillusionment. In the confusion of the early stages of the Spanish Civil War,  in far greater danger of being shot as a spy or dying of hunger and exposure than he is of receiving a mortal wound in the little combat he sees, he absorbs the random cruelty, waste, stupidity, and oppressive boredom that war always brings. In the end, he's sent home, lucky to have come away with his life intact, once again saved by coincidence. We should be glad of it. Had he died, none of these three books would have been written. Recommended.