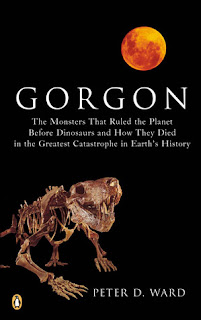 Generally, I find little to complain about when reading anything published by Penguin, and this is a quibble, I suppose, but Gorgon, by Peter D. Ward (Penguin, 2004), once finished, seemed somewhat deceptively titled. The rather long subtitle (The Monsters That Ruled the Planet Before Dinosaurs and How They Died in the Greatest Catastrophe in Earth’s History) might better have been something like “Deciphering the Greatest Catastrophe in Earth’s History” as the book focuses not on the animals per se but on the author’s involvement in work in South Africa researching the great Permian extinction (an earlier and more pervasive extinction than the better known and much later Cretaceous–Tertiary mass extinction that killed off the dinosaurs about 65 million years ago; the Permian extinction occurred about 250 million years ago). While fossilized gorgons and other animals play a role in the story as chronological markers, the book tells us little about what these creatures were like—failing to satisfy expectations raised by the title and by text on the back cover of the book. I also noted six or seven typographical errors, which is quite unusual in a Penguin publication. Penguin texts are generally perfect in a typographical sense.

The book is worth reading nevertheless—for its examination of the causes of the Permian extinction—including a new (at the time of publication) theory to explain it—and for its look at some of the men and women who endure hardship in remote places to try to find answers to questions about the biological history of our planet. At the same time, it includes some nicely wrought descriptions of South Africa’s Karoo desert region and of the political and social climate of South Africa shortly after Nelson Mandela’s release from prison and the end of Apartheid in the country he later presided over.

Research by Ward and others seems to point to a number of important conclusions. First, it refutes the idea that the Permian extinction was slow and gradual (until lately, a widely accepted notion). At the same time, the data seem to refute the idea that it was primarily the result of a massive meteor impact, now the generally accepted explanation for the later Cretaceous–Tertiary extinction. Ward lays out a theory suggesting that the mass extinction was caused by a rapid increase in atmospheric temperature and carbon dioxide and an attendant decline in oxygen levels, these changes the results of a number of factors, which may have included an asteroid impact, although not one big enough to have been responsible for the extinction on its own.

He suggests that the survival and later flourishing of the dinosaurs can be explained by pre-existing adaptations in precursor species that allowed them to acquire oxygen more efficiently than competitors, and this is consistent with the idea that birds (with similar adaptations: mainly complex lung systems with ancillary airsacs that extend even into hollow bones in some parts of the body) are the descendants of certain types of dinosaur. Essentially, he believes the Permian extinction reflects a wholesale failure of life on Earth to survive a sudden increase in heat coupled with a decline in available oxygen. He closes the book asking whether the period of abnormally low oxygen beginning around the time of the Permian extinction might have implications for the development of other adaptations—namely live birth and warm-bloodedness. I have yet to encounter any subsequent material that discusses these ideas (this book is already 15 years old, and based on research done as much as 25 years ago), so it’s hard for me to judge the reception they have found. I would be interested to learn what further evidence the scientific community has turned up (or not) since Ward’s conclusions were advanced.
Posted by Colin Talcroft at 6:45 PM