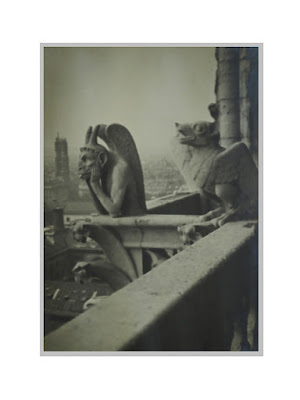 Tragedy in Paris, at the cathedral, but it sounds like the bulk of the structure is unharmed and the damaged portions can be rebuilt. Here's to the hope that that is true.

Shown is "Notre Dame, Paris—Grim Guardian" circa 1930, by Warren R. Laity, my grandfather. Silver-gelatin print. Image size: 9 x 13 inches. My grandfather was a photographer beginning to get an international reputation just as he tragically died of complications during minor surgery at the age of 46, in 1936. We have about 60 of his exhibition prints, mostly of European architectural subjects, as that was his specialty. Many of them are plastered on the back with exhibition stickers from all over Europe and the US. This image has exhibition stickers on the reverse from New York and Budapest.

He taught art history at a women's college in NJ that later became part of Rutgers. On his summers off, he did classes on transatlantic cruise liners to pay his way to Europe for research. He also spent a couple of summers (1922 and 1923) traveling around Europe by motorcycle and photographing while writing articles for the Harley-Davidson magazine.
Posted by Colin Talcroft at 10:14 AM