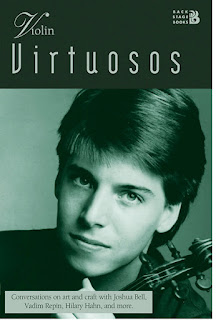 I picked up this slim (120-page) volume at a recent San Francisco Symphony performance, in the Symphony store. Violin Virtuosos (Back Stage Books, 2000) is a collection of short essays about 11 top violinists: Joshua Bell, Leila Josefowicz, Joseph Silverstein, Jorja Fleezanis, Victoria Mullova, Mark Kaplan, Chee-Yun, Christian Tetzlaff, Hilary Hahn, Vadim Repin, and Kung-wha Chung. Quite a range. Some of these are mostly solo performers, a couple are concertmasters. Some are younger, some are older. Some are men, some are women. I have heard a number of them perform live: Bell, Josefowicz, Chee-Yun, Tetzlaff, Hahn, and Chung. I've met several of them at after-concert signings (Bell, Josfowicz, Chee-Yun, Hahn, and Chung). I've even had dinner with one of them—Kyung Wha Chung, in Tokyo, years ago. Others I had never even heard of (Fleezanis and Kaplan). So, it was a rounded introduction to a cast of some of the best living violinists.

As this was published in 2000, much has changed since the essays were written. Hilary Hahn, for example, was only 21 at the time and had just released only her third CD (today her discography includes more than 20 discs). Josefowicz was relatively new to the scene. Bell, on the cover, looks like a little boy. These are interesting snapshots and interesting for the variety of experience of the various artists discussed. I especially enjoyed the little blurbs for each violinist that tells not only what kind of instrument they play but even what brand of strings they use. Violin Virtuosos is brief, but worth the small amount of time it takes to read.
Posted by Colin Talcroft at 10:50 AM