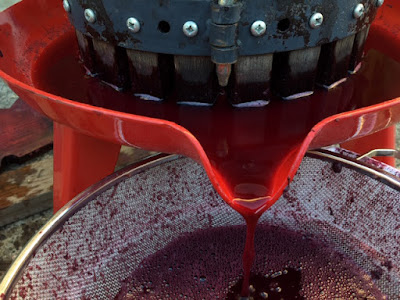 On October 21, I took advantage of an unexpected day off to press the 2019 Cabernet Sauvignon/Cabernet Franc, ending up with 11.5 gallons of pressed wine, which will eventually translate into about 55 bottles of finished wine. This year's Sangiovese had already been pressed for rosé (five gallons, or 25 bottles).

I also finally got the 2018 Sangiovese and Cabernet bottled.

2018 was unusual in that I made no rosé from the Sangiovese (I was so busy that, by the time I got to pressing the grapes last year, they had already taken on too much color to be a rosé, so I let them develop into a full-on red). This will be an opportunity to see how these grapes do as a red wine. We ended up with 29 bottles of 2018 Cabernet, 17 bottles of 2018 Sangiovese, a very small yield. 2019 was the biggest in many years because of a combination of factors. Our neighbor removed small trees shading the vines the year before and they got better light and air as a result. That and a new method of sulfur spraying (dusting rather than spraying) prevented nearly all mildew loss. We also suffered comparatively little damage from critters. 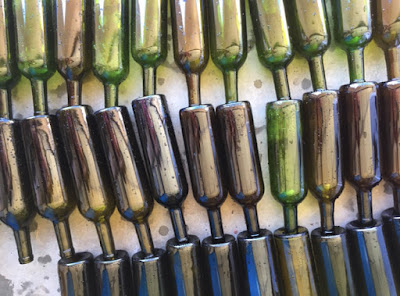 Posted by Colin Talcroft at 1:12 PM