Books I'm Reading: The Battle of Britain: Dowding and the First Victory, 1940 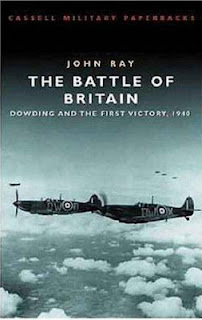 John Ray's The Battle of Britain: Dowding and the First Victory, 1940 (1994) is not about the Battle of Britain per se but about its leading figure, Hugh Dowding, Commander in Chief of Fighter Command, and issues of command and leadership in the RAF during the battle.

Although he had essentially won the battle by the end of September 1940, thwarting Hitler's plans to bring Britain to the negotiating table by achieving air superiority over Britain and then threatening an invasion, Dowding was dismissed from his position by November 1940 for failing to respond to changing circumstances. While Ray takes a mostly chronological approach, details of the actual fighting become mostly peripheral with the author instead focusing on how members of the RAF command structure, including the Air Ministry and Churchill's War Cabinet, interacted. Much of the interpersonal drama and the differences of opinion about strategy and tactics appear to have had their roots in the experiences of the lead actors during the previous world war, many of whom had been WWI fighter pilots.

The discussion revolves around disagreements about how best to counter German bomber raids over London, other major cities, and the air bases that hosted the Hurricanes and Spitfires that were, in fact, mostly successful in breaking up German daylight attacks. Dowding was perceived as a stubborn supporter of using no more than one or two squadrons together in a group, while others pushed for use of much larger groupings, or "big wings" of fighters. This controversy was news to me, but, apparently it has been much discussed by historians of the battle over the years, and this book assumes the reader already knows at least the outlines of the background history. The author appears to present new evidence objectively to argue that Dowding was not treated as badly as some sources have argued and that ultimately he was pushed out not so much because of the Big Wing controversy as because Churchill—at first a staunch supporter of Dowding—was eventually persuaded that new ideas were required at Fighter Command, especially new ideas for countering the night bombing the Germans had turned to, causing many civilian casualties. An interesting read, although it might be disappointing to a reader expecting the book to be an account of the battle itself. I read this book, sometimes by candlelight, during the blackouts associated with the wildfires here in Sonoma County in late October 2019.
Posted by Colin Talcroft at 12:58 PM