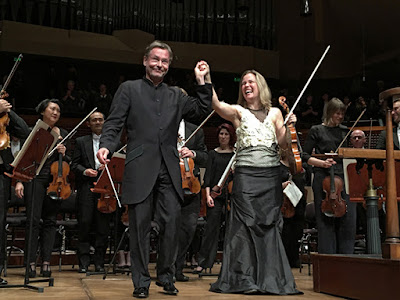 Last night (February 28) I attended the San Francisco Symphony concert at Davies Symphony Hall in San Francisco. On the program were a Beethoven overture (King Stephen), Esa-Pekka Salonen's Violin Concerto, and, after intermission, Nielsen's Symphony No. 5. Salonen conducted. Leila Josefowicz was the soloist in the violin concerto.

I first heard Josefowicz at a concert in 2011, likewise at Davies Symphony Hall, likewise with Salonen conducting his own violin concerto. It was impressive then. It was even more impressive last night, with all my impressions of the first performance magnified. Everything I said about the piece then, going on nine years ago, remains true, but Josefowicz seemed even more deeply engaged with the piece, her longer experience with it now evident. In 2011, the work was only two years old. In 2011, I said the following (and virtually all of it still applies--but, as I say, somehow magnified):


"It would be difficult to try to describe something so complex as Salonen's Violin Concerto in detail, but I can start by saying how impressed I was that Josefowicz played it from memory. The more abstract music becomes and the less dependent on devices such as themes and variations and development of themes, the more difficult it must be to remember. They say muscle memory takes over, but the feat of recall involved here was nearly as impressive as Josefowicz's playing, which was impressive indeed.

"The Violin Concerto opens with the soloist unaccompanied and it starts as if already in progress. The intensity is high from the get-go and the music feels relentless until the more pensive middle sections. Josefowicz played the early portions with a look of fierce determination on her face, at times seeming possessed, at other times looking somewhat more relaxed--even smiling--but there was a palpable tension even in the quietest passages. Particularly interesting was the use of a very rich percussion session that included numerous gongs and much else that was hard to see seated in the concert hall.

"The music seemed highly original—modern without being modern in the sense of being stylistically linked to what we think of as modern music when the word "modern" brings the early 20th century to mind. Surely this music has antecedents. Some sections reminded me of Khatchaturian's violin concerto. Some sections had the portentous feel of a dramatic film score. Some sections put me in mind of Shostakovich. In the later movements, there are passages that introduce the feel of pop music. Yet, the overall impression was of music new and different.When I hear stories about Mahler conducting early performances of his own symphonies or of Beethoven premiering a new piano concerto, I wish I could have been present. What's more exciting than the thought of being in the presence of genius as it presents new ideas to the world? I had the feeling that I witnessed a bit of history on Thursday--that I was present at the sort of performance that will be talked about in the future by people looking back, wishing they'd been able to see Salonen himself at the podium conducting his own compositions. The music seemed like a cantilevered beam reaching into the future, even if it's too soon to know exactly what might lie beyond the reach of that beam--what it might be creating a bridge to. This was one of the best concerts I've attended in a long time."

Muscular is the right word. Her arms look powerful and Josefowicz projects strength; she is an athletic performer. As before, I was astounded by the prodigious feat of memory playing a piece like Salonen's Violin Concerto involves. I was astounded by the speed, precision, and sheer energy of Josefowicz's playing. It was an exciting performance. At one point, Salonen got so carried away that his baton flew out of his hand and landed in front of the first row of seats. At the first break between movements, an audience member handed it back to him; he received it with a nod of gratitude and a slightly sheepish smile. The audience had a laugh.

It was a privilege to have heard the concerto a second time played by the man who wrote it and by the woman he wrote it for (and wrote it with; Josefowicz, like Joachim working with Brahms on that composer's only violin concerto, apparently provided a lot of input). After the concerto, she played an encore piece, also by Salonen, but she failed to identify it and none of the ushers knew exactly what it was.

The Beethoven overture is one I'd never heard before, or at least I don't remember hearing it. It was much as you might expect from Beethoven, along the lines of his other overtures. It was interesting for a pronounced back and forth between light dance-like sections and some dark and stormy passages with much sawing of the cellos and the double basses. The energy so notable in the concerto was there from the start of the concert. Salonen looked involved, in charge, happy to be on the podium, and the musicians seemed equally happy to be working with him. I'm so glad he'll be replacing MTT.

Speaking of energy, the Nielsen symphony is a somewhat sprawling, complex piece of music with some very energetic sections indeed. It's not a piece I know well and I felt there were extended sections that were rather amorphous and congested, but I enjoyed it nevertheless. I think I have at least one recording of it somewhere. I'll have to give it another listen.

Looking back at my concert notes here, I see that this was the fourth time I've seen Josefowicz in concert—on: December 8, 2011 (playing the Salonen concerto with Salonen conducting); on October 4, 2013 (Stravinsky's violin concerto with Pablo Heras-Casado conducting), on February 24, 2017 (Scheherazade.2, by Adams); and then last night' all in San Francisco.
Posted by Colin Talcroft at 11:45 AM