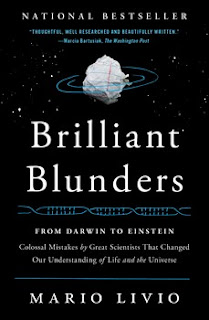 I belatedly note here that I recently finished Mario Livio's Brilliant Blunders (Simon and Schuster, 2013), a look at instances of error in the thinking of some of history's most brilliant scientists.

Livio looks at a logical gap in Darwin's theory on the evolution of species, which at the time of its publication, lacked a mechanism for natural selection; Darwin was ignorant of Mendel's research on inheritance which showed that traits are passed on to offspring in a way that allows natural selection to work. Darwin was right in spite of this failing.

The author looks at Lord Kelvin's mistakes in calculating the probable age of the Earth. He looks at the eggregious error Linus Pauling made in suggesting a structure for the DNA molecule, a particular interesting case as the error was so glaring. The book presents the curious case of Fred Hoyle who stubbornly attempted to refute the Big Bang theory of the origin of the universe, and finally examines Einstein's introduction to his equations of the so-called cosmological constant, which he later regretted, although recent research seems to be pointing in the direction of Einstein having been correct. An interesting look at the psychology of scientific thought and, in the current environment, five useful lessons in the importance of dispassionately examining facts with an open mind and a willingness to abandon conviction in the face of contradictory evidence.
Posted by Colin Talcroft at 1:19 PM