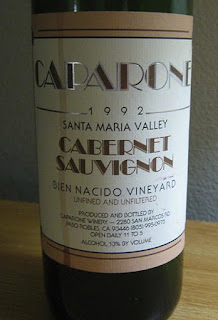 I've read that telling people about wines you've enjoyed is virtually always boring to them because you're describing an experience they can't participate in, so, I'll keep it short, but recently I opened a bottle of 1992 Caparone Santa Maria Valley Bien Nacido Vineyard Cabernet Sauvignon that I bought at the winery in the early 2000s. The cork crumbled away when I tried to insert the corkscrew. I had to push most of it into the bottle and then decant the wine through a sieve. I would have decanted it anyway, as there was an unusually thick layer of sludge in the bottom of the bottle.


Despite being 28 years old it was still vibrant, with scents of blood orange, brandy, and something that put me in mind of a fresh cigar--even a hint of wintergreen. It was richly fruity on the palate, with hints of cloves and herbs. It was almost like vermouth. I take the trouble to mention this wine because it was tasty, but also because it was a good example of a wine that really benefited from bottle age. Far too much good wine is drunk far too early.

Shortly after this, I opened a bottle of 1983 Château D'Issan that was even better—and another nine years older. I was too lazy to write down any impressions, but it was delicious. Having been in lockdown now for six weeks, we're beginning to make a dent in all the wine that's in the house. Haven't bought a new bottle for quite a long time. Among those we've been drinking down have been our own wines. The 2015 Clos du Tal Stone's Throw Vineyard Cabernet Sauvignon/Cabernet Franc (to give it its full name) from our backyard was especially good—really top notch. Last night I opened a bottle of our 2009. It was not as nuanced and had a distinctly milky quality, which suggests I got the malolactic fermentation to go well in 2009. The grapes were, of course, much younger (the vines were planted in 2001; we made our first wine in 2004). Nevertheless, the 2009 is quite pleasant.
Posted by Colin Talcroft at 10:33 AM