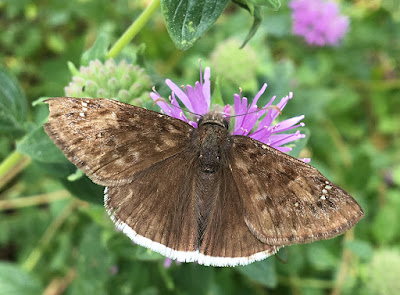 New garden visitor: I came across this butterfly in the garden this afternoon. I'm no expert, but it was a kind I've never seen before. I looked it up and I think this is a Funereal Dusky Wing (Erynnis funeralis), one of the group known as "skippers." According to the website I looked at, they are normally present from the San Joaquin Valley south to Argentina and Chile and they are described as an unusual stray in our area.
However, it could be a Mournful Dusky Wing (Erynnis tristis). The two types appear to be quite similar. As here in my part of northern California the Mournful Dusky Wing would be in its normal range, perhaps it's logical to assume this is a Mournful Dusky Wing. In any case, new to me.

[Not too long after posting this, I saw a Gulf Fritillary in the garden--which I don't think I'd ever seen before. A very pretty butterfly.]
Posted by Colin Talcroft at 2:11 PM