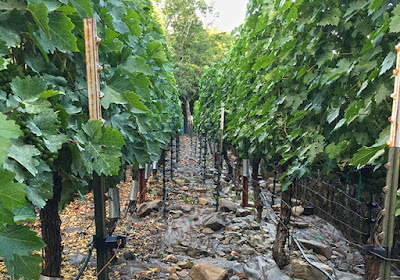 Grapes coming along nicely. Yesterday, I trimmed the backyard vineyard for the third time this season. The vigor of the vines is quite amazing. Keeping them trimmed back keeps everything exposed to light and air, which helps prevent mildew, although, since switching last year to dusting with sulfur in the spring instead of spraying with sulfur, I've had virtually no problems with mildew. The grapes look great at the moment. Before long, the little green globes will take on a blush of warmer color, which will mean the next vineyard task will be to put on the nets that protect them from critters--foxes, turkeys, deer, mice, raccoon--but especially raccoons, which can strip several vines of fruit in one night. 2020, the plague year, will be our 17th harvest. In those 17 years, I've learned how to protect the fruit. Sulfur, nets, and an electric fence.
Posted by Colin Talcroft at 11:01 AM