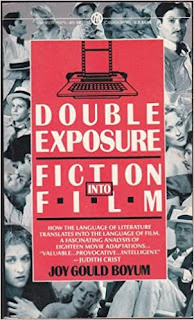 A somewhat more scholarly read than I was expecting, but Joy Gould Boyum's Double Expsoure: Fiction into Film (Mentor, 1985) is written well enough that I enjoyed reading the book for the pleasure of it. Boyum argues that an adaptation, done well, is entirely capable of translating into film not only the storyline in the writing that underlies it but the mood and effect of literature and even a great deal of a writer's style.

Boyum looks at a series of films more or less current at the time of writing, using them as examples of adaptions well done, adaptions that failed, and adaptations that she contends outdo the original.

Examples include The Innocents, The Great Gatsby, The French Lieutenant's Woman, and Apcalypse Now, which she examines from the point of view of perspective. She looks at Women in Love, Ragtime, Tess, and Daisy Miller in an examination of style and tone. In a chapter that considers metaphor, symbol, and allegory, she uses A Clockwork Orange, Lord of the Flies, Wise Blood, and Death in Venice as examples. Her final main chapter, which looks at the problem of communicating thought, dream, and inner action through film and takes as its examples Slaughterhouse-Five, Under the Volcano, The Day of the Locust, and Swann in Love, is followed by an essay on The Magnificent Ambersons. The author argues persuasively that, contrary to the received wisdom, film versions, while not always successful, can be works of art in every way the equal of their source material and that in some instances they are even improvements upon the original. She is a staunch defender of the adaptation.