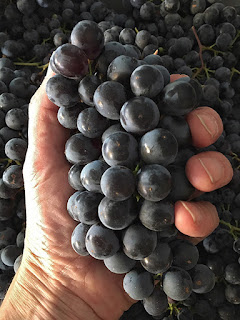 I decided to harvest the Sangiovese grapes today. The berries appeared to be mature, judging from the seeds, and some were already turning to raisins. With a heat wave predicted for today and the next couple of days and the next opportunity to harvest likely next weekend, it seemed the time was right. We got a total of 53.2lbs of grapes, which is roughly normal. We've harvested anywhere from about 40lbs to over 70lbs in the past.

A juice sample before harvest showed a brix of 19.5 degrees, which, corrected for the temperature, is around 20.25 degrees. The crushed grapes tested at 20.25 brix and a specific gravity of 1.080. As I often do with the Sangiovese grapes, from which we make rosé, I bumped up the specific gravity with a small addition of corn sugar (450 grams or so), which raised the specific gravity to 1.090. That should yield a wine of about 12.6% alcohol. The pH of the must was 3.58. I crushed the grapes a little after noon and will press them this evening after they've had about six hours on the skins--which is less than usual. I frequently leave them overnight, so that they've typically had about 18 hours before pressing, but that would mean pressing first thing in the morning and there won't be time to do that before work starts. The color this year is likely to be a bit lighter than usual. We'll see.

Posted by Colin Talcroft at 4:22 PM