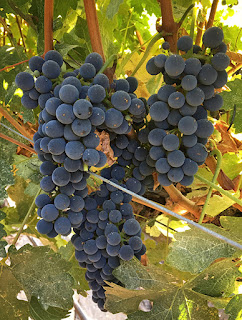 Just finished harvesting and crushing our Cabernet Sauvignon/Cabernet Franc grapes. It was a novel situation this year. Ash everywhere. Everything lightly dusted, but the grapes were mostly protected by the leaves of the vines. Many of the commercial wineries in the area heavily thin the leaves around the grape clusters toward harvest time, to give them extra sun and light and to facilitate harvesting, but I generally don't follow that practice and this year leaving the leaves alone served to protect the fruit.

The ash is easily removed. The problem is that "fire taint" is caused not so much by ash from distant (relatively speaking) fires, as in our case this year, but by prolonged exposure to thick smoke, which is absorbed directly through the grape skins and by the leaves, later migrating toward the fruit. I'm hopeful that the grapes we've just harvested won't suffer from taint as we have had only a few days of really bad smoke. We'll see. 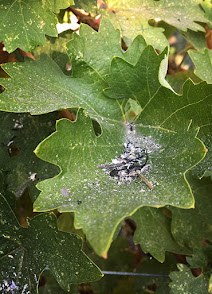 Today harvested 152.46 pounds of Cabernet Sauvignon/Cabernet Franc grapes, including fruit from two more-recently planted vines at the front door. The crushed juice measured at 24 degrees brix, which is perfect, and at a pH of 3.48. Aside from the ash, the fruit was very healthy. Suffered no losses to critters at all this year and no losses to mildew either. So, I'm hopeful that, despite everything, we'll have good wine from 2020.

The crushed grapes will undergo a two-three day cold soak now (or a cool soak anyway) until I inoculate the must. I plan to use the Rockpile yeast strain this year as my notes say that's what I used in 2015 and our 2015 wine turned out to be very good indeed. 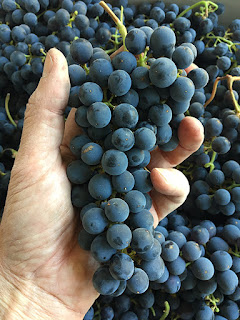 Posted by Colin Talcroft at 6:25 PM