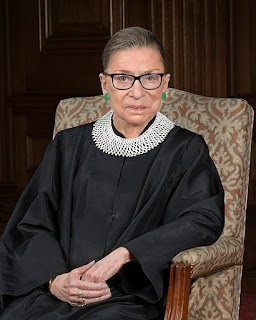 It was a shock last week when I read breaking news that Justice Ruth Bader Ginsburg had died--a shock because it was sad news of the passing of a such an important figure, but a shock because we are so close to the election and there was no doubt in my mind that Mr. McConnell would have no qualms about pushing through a replacement nominee, despite the insult of his refusal to even consider President Obama's entirely legitimate nomination of Merrick Garland in 2016--despite the bald hypocrisy.

The Republicans now are, of course, correct in saying that the President has a right and a duty to appoint a new justice. The point is that President Obama had the same right and duty (why does this need to be explained to anyone?). Objections now to appointing a justice so close to the election are based on a sense that to give Mr. Trump another appointment is a double insult to President Obama and Merrick Garland--and that to block another trump appointment is only to right the original wrong. The Republican party has sunk lower than I would have ever thought it could go.

Posted by Colin Talcroft at 5:05 PM