Books I'm Reading: Hogarth: A Life and a World 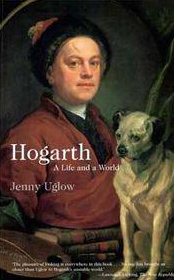 Jenny Uglow's biography of William Hogarth—Hogarth: A Life and a World (1997, Farrar, Strauss and Giroux)—is a big, heavy book that took me a long time to finish, reading in spurts, but I eventually did finish it and I'm glad I plowed through it it to the end. It revealed to me how ignorant I was about Hogarth and that I had conflated in my mind some of the work of Hogarth with that of French artist Honoré Daumier. I feel straightened out now.

The book was slow going in large part because of the extraordinary detail it goes into about Hogarth the man, his work, his milieu, and the London that was the backdrop to his life, including a great deal about the politics of the day—a subject I always find hard to follow and retain.

I had always thought of Hogarth (or my Hogarth/Daumier person?) as a printmaker and satirist. Perhaps the greatest revelation reading Hogarth was the realization that Hogarth was a fine painter, and rather more down to Earth than the best-known painters of the generation that followed him—Gainesborough and Reynolds—who always strike me as being somewhat too refined (a matter of taste, of course). I had never really thought about how Hogarth worked, but I suspect, if asked, I would have assumed his famous prints were conceived as prints, engraved from sketches, but it seems that Hogarth in most cases did full-blown oil paintings of the subjects that became his prints and that the prints were engravings of the paintings, often cut by Hogarth himself, who got his start apprenticed to an engraver (although as he got older and busier, some of his work was engraved for him by others).

The complexity of the prints is extraordinary and because so much of the detail refers to contemporary events and people, a good portion of their meaning is likely lost on most modern viewers without some kind of annotation, and Uglow provides that, bringing each of the major works to life, pointing out the significance of the smallest details.

She fleshes out Hogarth, the man, too—as the painter and famed satirical printmaker he became—but also as a supporter of native British artists facing what he thought was too much fuss over artists from the continent working in Britain, as a champion of the rights of engravers (he was in large part responsible for legislation that helped protect engravers from piracy), and as a philanthropist (he was very much involved in the founding of London's first institution to protect abandoned babies, which, shockingly, Uglow points out, were common at the time, often left by the side of the road or somewhere equally exposed, to die. The book's subtitle—A Life and a World—is apt. Recommended as a portrait of a man, of a great city, and of a bygone age.

Posted by Colin Talcroft at 6:52 PM