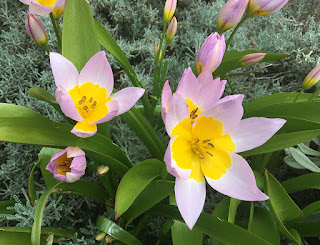 I planted a variety of species tulips (as opposed to the more common hybrid tulips) in the garden many years ago now—maybe nine of ten years ago. I planted hundreds. They were beautiful and, apparently, delicious. I large fraction of them disappeared into the gullets of a local colony of ground squirrels (since departed). Others gradually stopped blooming after a year or two, as tulips often do (while daffodils seem immortal). One species, Tulipa bakeri, has proven the most robust. These (those that remain) still come up  year after year. The first buds opened this year on March 20.
It is from species like these that what most people think of as tulips today were developed. Tulips are native to places like Turkey and the countries of the Caucasus region. This is a variety called "Lilac Wonder." Tulipa bakeri bloomed in the garden on March 5 in 2009 and on March 16 in 2010 (although I seem to have two contradictory dates for 2010--also February 24), on March 14 in 2011, on March 4 in 2012, on February 25 in 2013, on March 6 in 2014, on February 20 in 2015, on March 9 in 2018, and on March 16 in 2019, so this is toward the late end of the range I've noted over the years, but nothing out of the ordinary.
Posted by Colin Talcroft at 4:30 PM