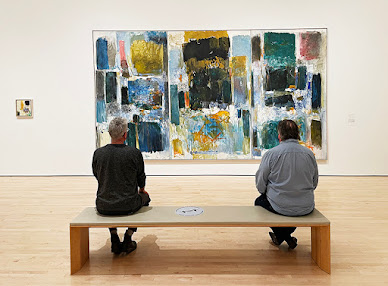 Yesterday I had the pleasure of visiting an art museum for the first time in many months. I went to see the Joan Mitchell show now on view at SF MOMA. Masks were required, but showing vaccination status was not. I had my card ready to go, just in case. Much of the space is shut down, especially on the second floor near the photography galleries where the little coffee shop always has been a cozy spot to take a break in. The only photogrphy on view was a set of four panoramic photos of San Francisco following the 1906 earthquake. No matter. I had come to see Joan Mitchell, whose work I have noted before here and there but I really knew little about the trajectory of her career. She seems to have spent most of her life bouncing back and forth between New York and France, sometimes in Paris, sometimes on a large estate in the south. She is often considered an Abstract Expressionist, but doesn't seem to have cared much about the label. Apparently she spent much more time with like-minded painters in France (including Sam Francis and Pierre Soulages) than with the painters in New York most closely associated with the Abstract Expressionist movement.

I enjoyed the show. I'm glad I went, but I had mixed feelings about the work (as I always have had). Some of the paintings I liked very much, others left me rather cold. A great deal of her work has an unfinished, messy feel to it. For me at least, the thick, discrete strokes of paint don't always come together into a whole greater than the parts. Rarely are there open planes of color that give the eye a quiet place to dwell.

The wall notes kept referring to views of the spaces that she lived in (particularly her gardens and the local landscape) and memories of experience as the wellsprings of her compositions but also to Monet, Cezanne, and Van Gogh as sources of inspiration. That was a bit puzzling to me. Monet, yes—in the brush strokes and the garden-inspired abstractions. Van Gogh, maybe—perhaps in one image that put me in mind of his crows over a wheat field, but Cezanne was nowhere to be seen. I was frequently reminded of Pierre Bonnard, actually. Both Mitchell and Bonnard seem to have been fond of cadmium yellows and oranges. 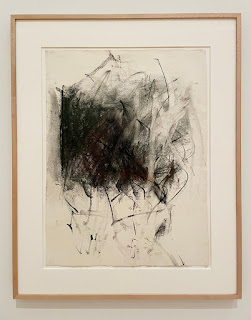 The garden-inspired pieces seemed most successful to me, but I particularly liked the very large "Salut Tom" of 1979, on loan from the Corcoran Gallery, in Washington D.C. (bottom photo). It is monumental in scale, like Monet's largest water lily paintings, and similarly requires time and space to stand back in to appreciate. Some of her drawings I enjoyed as well and it was interesting to see a case full of  paints, brushes, palette knives, and other tools from her Studio. Worth a visit. The show runs through January 17, 2022 at the San Francisco Museum of Modern Art. 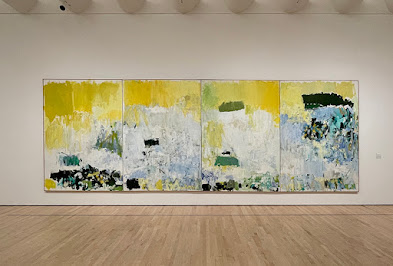 Posted by Colin Talcroft at 1:45 PM