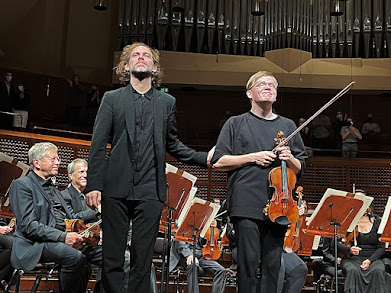 I attended a live San Francisco Symphony concert Friday night (October 22)—the first live performance I've been to since February of 2020. Vaccination card and ID checked at the entrance. I was happy to comply. It was good to know that everyone in the building was vaccinated. Generally, the orchestra members did not wear masks (there were one or two exceptions), neither did conductor Esa-Pekka Salonen or the soloist in the US premiere of Bryce Dressner's Violin Concerto, Pekka Kuusisto, a Finn like Salonen.

The concert opened with Beethoven's Second Leonore overture, which was both familiar and unfamiliar. It's not the one (of the four, I think) that we most commonly hear.

According to the program notes, the Dressner Violin Concerto got its world premiere on October 1 this year, in Frankfurt. The performances in San Francisco this weekend have been the first in the United States. It's hard to put into words the feelings that music evokes—which is why writers of notes to recordings and concerts frequently resort to descriptions relying heavily on music theory that I suspect goes over the heads of most readers, including me. Suffice it to say that it was a gripping performance. The Dressner concerto grabs you by the throat and rarely loosens its grip until the very end. The soloist gets a real workout. The score involves a lot of extended technique such as bowing very close to the bridge or rubbing the bow along the strings the long way to produces novel sounds (which is not to say the piece is gimmicky). Despite a few lyrical passages and an extended cadenza toward the end (that appeared to be improvised; Kuusisto played from the score on a tablet with a foot switch to turn the pages and during the cadenza he was no longer looking at the screen), the general impression was one of driving forward movement based on extended near-repetitions that evolve through continuous small variations. Percussion plays a large role. At the pre-concert talk, the composer said "You could almost call it a concerto for violin and percussion." He also said that he thought the San Francisco Symphony percussion section "the best in the world." He seemed to mean it, saying that he'd worked with orchestras all over the world and that the SF section was the best he'd ever worked with. Very enjoyable. I hope Kuusisto records this soon. It's music that will bear repeat listening.

As an encore, Kuusisto played a sarabande from one of the Bach solo partitas/sonatas—very familiar, but out of context I can't say which one it was from. Kuusisto played it in a rather tender, fluid way that was a sharp contrast to what preceded it. He relied heavily on rubato, which some people think has no place in the music of Bach, but it was a persuasive interpretation. About a third of the way through, someone's phone rang. He took it in stride. He stopped playing momentarily and said "That's the wrong key", laughed (and the audience laughed with him), and went back to playing.

After intermission, the orchestra gave us Schubert's Symphony No. 5, my favorite (everyone's favorite?) of the Schubert Symphonies. After the concert, finding good food was a challenge. Because of pandemic restrictions, our go-to place, Absinthe, is now closing its kitchen at 9:00PM, even on Friday and Saturday. Ended up at a Mexican–French place that sounded much better than it tasted. Some research will be required ahead of the next SF Symphony concert—to which I'm looking forward. It was a real pleasure to hear live music again. 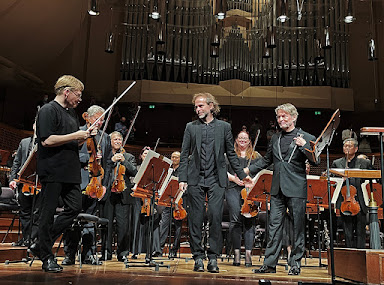