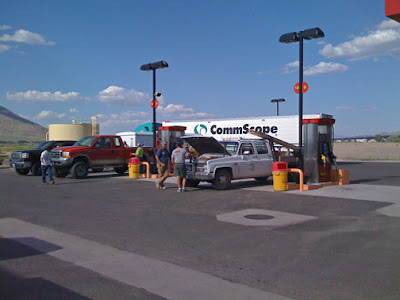 Drove up to the Stillwater National Wildlife Refuge this morning, near Fallon, Nevada. The place was mostly dry, so didn't see very much except in the marshy areas. Saw coots and ruddy ducks mostly. On the drive up to the place, however, the road followed a canal where I saw a great egret, a great blue heron, a coot, and in the fields a number of birds I eventually identified as Western kingbirds--a first sighting for me. Also saw a red-shouldered hawk circling.

The drive west from Fallon to Elko was not especially exciting (first north on 95, then east on I-80). Mostly eroded hills with occasional outcroppings of harder rocks. The terrain became gradually more rugged further west, but nothing spectacular. The most attractive thing I saw all day was the lovely, smiling redheaded girl that took my order at Starbucks just now. For some reason, Elko smells like Kentucky Fried Chicken. Really wanted to make Salt Lake City today. The idea of going all the way across the country looks rather daunting now. It requires so much high-speed driving on flat, straight roads. I much prefer slow driving on small windy roads, but then you don't get very far. Still seeking a compromise, I guess. What pushes me to go on?
Posted by Colin Talcroft at 7:35 PM