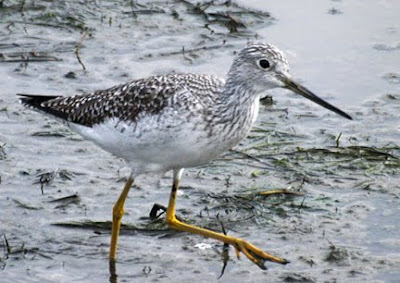 I made my first visit to Shollenberger Park, in Petaluma, today. "Park" is a misnomer. It's just a marshy area and ponds surrounded by a dyke with a path, but clearly an excellent place for birding. Even at this time of year, with comparatively little water, I saw Black-necked Stilts, Avocets, White Pelicans, Coots, Ring-billed Gulls, Heermann's Gull, Snowy Egrets, Great Egrets, a Black Phoebe, a Common Tern*, Mute Swans, and Greater Yellowlegs--not to mention at least two species of smaller sandpiper-like bird I couldn't identify. This last (the Greater Yellowlegs) was a first sighting for me as an adult. At first I took these to be Willets, but a more experienced birder wandering by set me straight.

Having seen them both now at close range, they are very easy to distinguish, but from a distance they can look similar. The key is the yellow legs (the Willet has bluish-grey legs) and the plumage on the  Yellowlegs is a little darker and more distinctly patterned, especially the wings. If you can see the birds fly, they are easy to tell apart because of the black and white on the underwings of the Willet. This is a place that will be great to visit over and over again. I can see that after one visit--and it's only 20 miles from home. I wonder what other birds--migrants perhaps, an occasional visitor from the east--are in the area? There are some in particular I'd very much like to see.

[UPDATE: Went back again two days later. Saw the same birds, but also a Bonaparte's Gull, a first sighting for me, and Killdeer and Mockingbirds--the latter eating blackberries. So that's about 15 species I've seen at Shollenberger Park in my first two visits, a mere 8% of the 195 that are said to be present there at some time or another. I look forward to visiting again later in the year.]

*Reading this ten years later, as a more experienced birder in this area, I note that the bird I took to be a Common Tern very likely was some other type of tern, as Common Tern is fairly unusual here.
Posted by Colin Talcroft at 5:47 PM