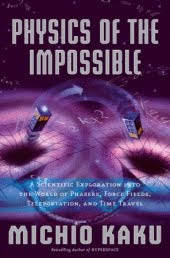 I just finished reading Physics of the Impossible by Michio Kaku (Anchor Books, 2008), a rather engaging writer who looks at the physics behind the stuff of science fiction--examining everything from Harry Potter's invisibility cloak to the phasers of Star Trek to that venerable impossibility, the perpetual motion machine--and classifying each as a class I, class II, or class III impossibility.

The first of these classes he defines as something impossible today but that does not violate the known laws of physics and is likely to become reality this century or next. Among these he lists teleportation, antimatter engines, and certain types of telepathy, psychokinesis, and invisibility.

Class II impossibilities are phenomena that he describes as being at the "very edge of our understanding of the physical world." These, too, do not violate the laws of physics, but are unlikely to be realized for thousands, perhaps millions, of years. He puts time machines, hyperspace travel, and travel through wormholes in this class.

Class III impossibilities violate the laws of physics as we understand them. Kaku points out that there are relatively few of these and that even these may prove possible, but that that eventuality would have to be accompanied by fundamental changes in the way we understand the universe. I have a feeling that affordable health care for all in the United States comes under this last heading. Sad to hear of Edward Kennedy's death last night. It's a shame he wasn't around to participate more in the efforts to achieve reform. But I digress. A good read. Recommended.