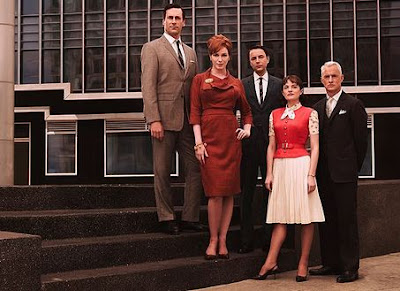 I've just finished watching the third episode of Mad Men this season (Season Three). Mad Men is slow as molasses. There are many untied loose ends. It's essentially a soap opera with only one hour a week to do what a 30-minute daily drama gets two-and-a-half hours to do each week. I'm beginning to wonder how long it will sustain my interest if it never rises above the soap opera level. There's only so much dallying and office politics people can take. (Maybe I'm wrong about that. Isn't The Guiding Light going off the air this month--after 72 years? And, if pressed, I'd admit that I am wondering what will come of Don's eyeing the teacher dancing round the maypole, I am wondering about the man with his hands on Betty's pregnant belly--will he appear again?) Still, I enjoy Mad Men. It's the only show on TV I make time to see each week--and that's something I haven't done in decades (in fact, since Star Trek--the original Star Trek). I'm asking myself why does Mad Men fascinate?

It's partly style. From the first episode, the creators made it clear they would attempt to faithfully reproduce the period. I was born in New York in 1960, living in Brooklyn. Although we left when I was seven, my earliest memories are of New York, from late 1963 to 1967. My New York memories are those of a small child, but I still feel that the people of Mad Men inhabit an era and a place that I know. I feel like I'm filling gaps, getting glimpses of the backdrop to the earliest period of my life that I can remember.

I take it in, but always with skepticism. Are they getting it right? I hope they are. It's hard for me to say. The people of Mad Men are not the people of my childhood. We moved in different circles. Peggy's mother and sister are most like the people I remember from our apartment in Brooklyn. The cramped living spaces of their home and Peggy's are familiar. In these scenes and others I sometimes find myself looking at objects in the room with more care than at the characters that people those rooms. There's an odd comfort in things like the foldable wooden drying rack that Peggy uses, in a container of spices wearing the package I remember from our Brooklyn kitchen.

Style, in the sense of fashion, is another aspect of the same. I love the men's suits. The women, however, seem overdressed most of the time, which feeds my skepticism, a nagging skepticism I wish I could let go of. It's a shame Mad Men is not actually a show of the era. I wish there were no room for doubt. Perhaps it's no coincidence that the only other TV show I'm vaguely passionate about is the Dick Van Dyke Show. Likewise set in an office and in the homes of its main characters and again in New York in the early 1960s. The Dick Van Dyke Show, too, is a fiction, but at least we can be certain its props are period-correct--no room for doubt. I keep wondering if Rob and Laura Petrie will appear within Mad Men. That would be a nice touch. The Dick Van Dyke Show debuted in October 1961. Don and Betty could be watching it now--but it was slow to take off and it ran five years. There's time. What year is it in the Mad Men timeline? 1963? I noticed that the marriage of Roger's daughter is set for November 23.That won't go off well. JFK will have been assassinated the day before--the first day I remember in my own life.

Perhaps my fascination with the physical details allows me to be less concerned about the authenticity of the interpersonal relationships. I question these less, but I question them nevertheless--especially the office interactions. Would these people really have been as rude to each other as they sometimes are and then, upon next meeting, have behaved as if the slights were never delivered? Would the women really have been treated with so little respect? Are we being fed nothing more than stereotypes--pictures of what we think we already know about the 1960s?

There are so many loose ends. The most bothersome is the relationship between Pete and Peggy. Is Pete so dull that he is entirely unaffected by Peggy's revelation about her baby? Has he forgotten that she told him? He behaves as if he never heard the news. It was never clear what he felt about her in the first place--I'm as confused about that as Peggy herself was (at least while she seemed to care). Roger's health is another loose end. He had two heart attacks and nearly died, but he lives his life as if it never happened--still drinking, still smoking. His lifestyle choice is not the issue. Maybe a man in his position would choose to make no concessions, but he looks far too healthy for a man that has made that choice. What happened to the character that openly announced he was gay? He has disappeared. Where did Ken Cosgrove the short story writer go? There are others loose ends.

There are details that bother me--especially the airline crew in Episode 1 this season. Having been married to a stewardess--excuse me, a flight attendant--for 18 years, I know a thing or two about the habits of airline crew. I can't imagine they would have gone to dinner in their uniforms. Surely they would have checked in to their hotel rooms, changed, and then gone out again. No? A detail, but one that continues to bother me. I'll have to ask my father. He worked for British Airways (B. O. A. C.) through the 1960s and beyond. [Update: My father says this would have been normal until a somewhat later period. As stewardesses got a reputation for looseness, airlines apparently started forbidding them from wearing their uniforms except on the job and to and from the job. Interesting.]

Still, I enjoy watching the story lines unfold. We'll see where things go. We already know there will be a Season Four. I wonder if there will be a Season Five? I think that will depend on how well the creators transition from soap opera to something of a little more substance. [Still looking for an appropriate credit for the photo above, which, fairly obviously, is not by me.]