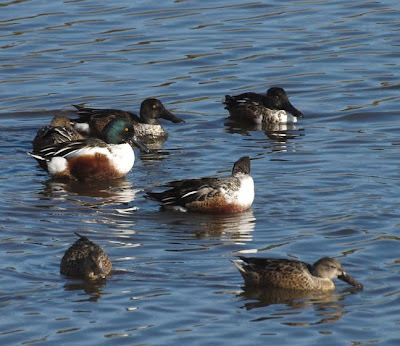 Spent the day yesterday out at Pt. Reyes and then stopped off at Shollenberger Park, in Petaluma, on my way home. There wasn't a lot to see at Pt. Reyes. At the lighthouse there were a couple of Common Murres in the water, saw a Savannah Sparrow on the way up to the light house, along with a lot of White-crowned Sparrows, but that was about it. I did bump into a geology class, however, and very much enjoyed listening to the teacher explain the very interesting swirls of sandstone and conglomerate at the point. Always wondered about the formations there. I think I've posted about them here before. On the Chimney Rock side of the point, I saw a lot of Surf Scoters, Western Grebes, and Eared Grebes. Saw a Brown Pelican, four Pacific Loons, a Golden-crowned Sparrow in the trees by the residence, Crows, a Turkey Vulture or two, and, more interestingly, a Western Meadowlark on the drive out again.

There were many raptors around. The only one I could identify was a Red-tailed Hawk. There were several smaller birds, all motionless, expertly using the updrafts from the coast to stay still while searching the ground for prey. They had brown heads, were pale underneath, but had a tracing of brown under the wings and speckles at the "wingpit." The tips of the wings were very dark. I got a very good look at the birds, but could find nothing in the book that seemed right. Closest was a Ferruginous Hawk, but, the book says they should have distinctly dark legs, which these didn't and that their heads should not have been brown. Another interesting feature was apparent from above. The last third of the wing (but not the primaries) had an almost transparent look. Very frustrating not to know what this was. Still, it was fun to watch them hunt.
At Shollenberger Park, I saw Black Phoebes, Greater Yellowlegs, Coots, Ring-billed Gulls, Western Gulls, Mallards, a single Canada Goose, Black-necked Stilts, Avocets, four Long-billed Curlews, a Marbled Godwit or two (I think--they were very far away), and Northern Shovelers in large numbers--perhaps 200 of them. A new bird for me. (Pictured above; these are males and females, the juveniles, with the black heads, are going from juvenile plumage to winter plumage). Other birds were mostly in their confusing winter plumages, but I believe them to have been long-billed dowitchers. Also saw many Black-bellied Plovers in winter plumage.
Posted by Colin Talcroft at 9:21 AM