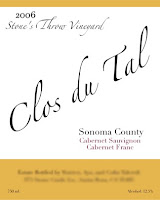 Tonight I opened a bottle of the 2006 Clos du Tal "Stone's Throw Vineyard" Cabernet Franc/Cabernet Sauvignon--that is, a bottle of one of the wines we make here in the garage from grapes we grow out back. 2006 was the third vintage. The vines were planted in 2001, so they were quite young in 2006, but this wine has improved considerably since I last tried a bottle a few months ago.

The nose in particular has developed some nice leathery scents and some hints of roses that I don't remember from the last time I tasted it. The wine tastes fruitier and the tannins are beginning to soften. It still seems a bit austere compared to the riper wines we made in 2008 and 2009 (the 2009 is yet to be bottled), but this has come along nicely. It will be interesting to continue tasting a bottle every three months or so to see what kind of staying power it has.

Before long, it will be time to do a vertical tasting of everything we've ever made--from 2004 to 2009. The only real disaster was the 2005. Most of the grapes disappeared into the gullets of the local raccoons in that year. I made only six bottles from sour grapes that had to be picked too soon--what the raccoons left behind. Since then we've devised a system of nets and electric fencing that has made it possible to let the grapes hang as long as they should, which has made a big difference (needless to say). The 2008 and 2009 wines were made from grapes that were optimally ripe. The 2009 looks especially promising.

In case you're wondering, "Clos du Tal" is a play on "Clos du Val," with the T-A-L of Talcroft substituting for "Val." We call it "Stone's Throw Vineyard" because we live on an old basalt quarry--there are a lot of stones here--and the vines are a stone's throw from the house. Appropriately, our little vineyard of 32 vines is surrounded by a stone wall. "Clos" in French refers to a walled vineyard, often owned by a monastery. Such vineyards are common in parts of France, especially in Burgundy. There are some remarkable walled vineyards there, notably in the town of Gevrey-Chambertin. "Clos" is related to our English word "cloister."

What a pleasure, what a luxury it is to be able to open a bottle of wine I've made myself. I wish I could share it with you. Last summer, when I drove to Ohio, I took a couple of bottles with me to share with friends. This summer I will take a couple to France, to share with friends there. Friends I haven't seen in many years.
Posted by Colin Talcroft at 11:14 PM