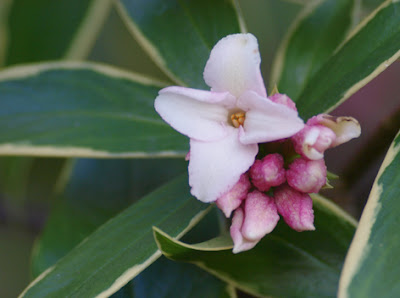 Somewhat belatedly I report that the first buds on the big Daphne under the coral bark maple tree opened recently--on January 21, to be exact. Soon the entire bush will be covered in the tightly clustered white blossoms blushed with pink and smelling of citrus and perfume. This is probably the most fragrant plant in the garden. It's a slow grower and finicky, but this one seems to be happy. A second bush planted last year appears to be coming along well (in bud, but not yet blooming), but it's toppling and needs to be staked; night creatures have been scraping at the earth at its base--probably raccoons or skunks, looking for food.

Daphne odorata bloomed on January 18 in 2010 for a year of 368 days. The plant bloomed on January 20 in 2009 (a year of 363 days). So far, Daphne has calculated an average year of 366.5 days--very close to an actual year. I imagine people of long ago who lived closer to the land and paid attention to these things didn't really miss calendars. The signs of the passing of time are everywhere.

I note also first blooms on the Candytuft (Iberis) in the garden--although this one's very hard to call. There are about five of these in the yard and they all bloom at slightly different times and over a long period. The first flowers open slowly and sporadically. It's hard to say exactly when the plant first comes into bloom. A month from now, the little bushes will be covered in starkly white flowers of very cheerful appearance--nice to have when the weather is still cold. Taking today (January 23) as the first day of bloom, however, the plant has calculated a year of 367 days (I chose January 21 as the first day of bloom in 2010) and a year of 364 days in the preceding year (first blooms were on January 22 in 2009). The average year so far is thus 365.5 days according to Iberis--again, very close to a calendar year.
Posted by Colin Talcroft at 12:24 PM