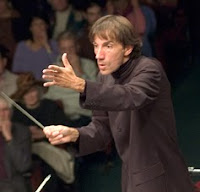 Overall, an enjoyable concert, but rather uneven, I'm afraid.

I did like the Rihm Serious Song. Immediately upon entering the concert hall it was apparent that something a little unusual was about to begin; there were no violins on stage--among the strings, only the violas, cellos, and basses were present. Also unusual was the presence of four clarinets at the front of the ensemble. I would say the piece didn't seem very song-like, but it was certainly serious. Opening with quavering dissonances among the four clarinets in the low register, the piece was dark and somber throughout with all the instruments mainly being given the lower notes in their ranges. No flutes either. According to the program notes, the piece was commissioned by conductor Wolfgang Swallisch who wanted a composition explicitly evoking Brahms. Composer Rihm was particularly impressed by the Four Serious Songs by Brahms and looked also to the example of the Deutches Requiem for the orchestration without the bright-sounding violins and flutes. To many I suspect this tone poem--that's what it seemed to be--will sound too abstract, too somber, too brooding, but it appealed to me. I applaud the inclusion of something rather different from the standard fare. It was a nice counterpoint to the very familiar pieces that followed. 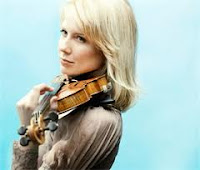 In the Brahms Violin Concerto Soloist Vähälä played well, but seemed to have difficulty keeping her instrument in tune. I always hesitate to say things like that (not that anyone cares very much what I say) because I never trust my ears entirely, but I thought she was out of tune for about the first third of the first movement--a little bit sharp on at least one string. She tried to retune a couple of times using the fine adjustments at the bridge but finally resorted to turning one of the tuning pegs--a very risky thing to do while in the middle of playing, given the coarse adjustment the tuning peg provides. I'm persuaded that I was not mistaken about her difficulties by the extensive tuning she did between the first and second movements. Once she got things straightened out, everything sounded better.

Her instrument had a surprisingly strident sound. As it happens, that was rather effective in some of the rapid passages of double-stopping in the concerto, but otherwise it gave a cold and at times somewhat whiny impression. She was playing a 1678 Stradivarius. I am no expert, but I do know that that would be an early violin in Stradivari's career. Perhaps that has something to do with it? The second movement was marred by repeated wobbly entrances by at least one of the horns. Having said all that, I thought the Santa Rosa Symphony musicians focused and responding much better to Maestro Ferrandis's direction than usual, which is a good thing, and it's always interesting to hear such a familiar piece live. Despite the hiccups, I enjoyed hearing the concerto and the crowd--notably younger than is usual in Santa Rosa--was very appreciative.

The Fourth Symphony by Brahms is another very familiar piece, being one of the first I was attracted to during my shift as a teenager away from rock music in favor of classical. I'm afraid the ensemble wasn't quite up to it. The focus apparent during the violin concerto was nowhere apparent here. The players simply weren't together much of the time. Still, the ensemble has come very far in the 10 years I've been a subscriber to their concerts, and I mean no ill will. I'm glad they're here and I will continue to support them. At their best, they can be very fine indeed.

Photos of Bruno Ferrandis and Elina Vähälä courtesy of the Santa Rosa Symphony
Posted by Colin Talcroft at 1:42 PM