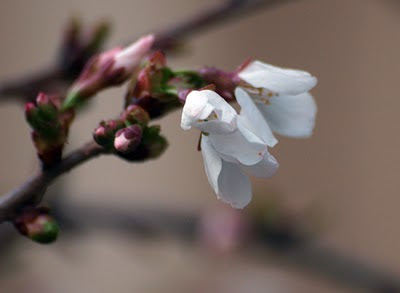 First blooms on March 19 on the "Snow Fountain" weeping flowering cherry in the side garden. Only one or two flowers have opened, and even those have mostly been blasted by the heavy rains we've had, but the first flowers opened yesterday. "Snow Fountain" bloomed on March 23 in 2009 and on March 14 in 2010, calculating years of 356 days and 370 days, which average to 363 days, just short of an actual year.
Posted by Colin Talcroft at 11:52 PM