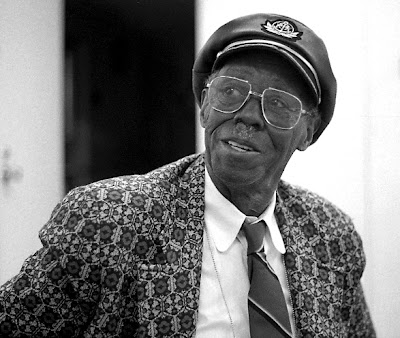 I was sorry to hear that blues pianist "Pinetop" Perkins died yesterday. He was 97, but had been performing recently, mostly in Austin, Texas. I had the privilege of sitting with him and talking backstage at a Tokyo blues festival in 1999 (photo) while doing research for the liner notes that eventually accompanied And This Is Maxwell Street, the recordings from Mike Shea's 1964 documentary film And This Is Free. Perkins played for many years with the Muddy Waters band but had also known Robert Nighthawk, the guitar wizard featured on many of the Shea Maxwell Street recordings. We wanted to talk with people that had worked with Nighthawk. Perkins was a soft-spoken, slow-moving man that gave an impression of gentleness, but, like many aging blues musicians I've met (notably Frank Frost, B. B. King, and R. L. Burnside), he dropped about 50 years as he got up on stage and began to make music. RIP
Posted by Colin Talcroft at 10:21 AM