I attended the opening of the latest show at Hammerfriar Gallery in Healdsburg on May 2. The show, called "Ain't Natural," brings together four superb collage artists working in the Bay Area--Jenny Honnert Abell, John Hundt, Sherry Parker, and Scott Wilson. 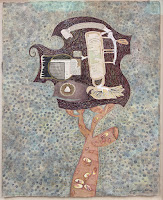 Collage unites the four artists but they work in very different styles. Jenny Honnert Abell's work combines the surreal with religious iconography. Brought up a Catholic, she attended parochial girls' schools through high school. While explicitly religious themes don't seem central to her work, clearly the imagery of the church made a lasting impact on her sensibilities. In talking with her about her collages I sensed in her an uneasiness about making fun of the religious imagery she appropriates, a hard-to-shake compulsion to take it seriously, at least at some level. Yet, the work is irreverent. The show includes several small pieces on worn but fancy book covers, in themselves evocative of churchly things like decorated vestments. Onto these covers she's attached perches for Jesus-headed birds that somehow manage to look content and not unnatural--the serenity of expression of the Jesus heads doing its work. In other pieces on display, bird heads grow out of tree branches. Pictured here is a somewhat different piece entitled "The Monroe Flower" that I liked for its use of color and the multiple levels of enclosed detail it employs. 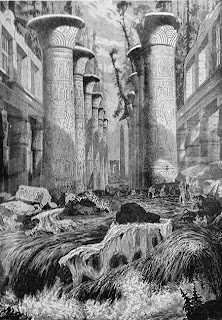 John Hundt seems to work exclusively with engraved book illustrations. He carefully cuts out architectural fragments, figures, animals, snippets of scenery and other elements with a tiny pair of scissors and assembles the pieces to create imaginary spaces that are clearly unreal but spaces that use perspective and subtle overlaps to trick the eye into seeing them as plausible, inhabitable. I'm reminded of the photographic work of Jerry Uelsmann. Merged and blended contradictions in Hundt's work involve not only physical space but also time; inevitably the old engraved images are evocative of something old-fashioned--we no longer illustrate books with engravings much and the subjects Hundt chooses are often historical--but, at the same time, the strange juxtapositions seem modern--at least modern in the sense the word is used in art history. 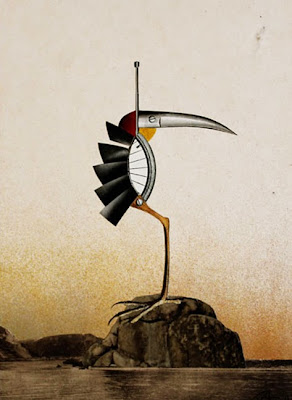 Sherry Parker is among the most delightfully inventive artists I've encountered in the Bay Area. Her work is consistently of the highest caliber. She has an exquisite sense of composition. Her subtle color sense is equally impressive. Most especially, though, I like her work for the slightly edgy whimsy she nearly always achieves. Bizarre creatures, part human, part machine, inhabit her surreal landscapes. These are dream worlds, yet they are familiar enough to be both seductive and deeply unsettling. They are inviting and a little frightening at the same time.

To take just one example, "Yellow-throated Lookout Bird" is immediately amusing because of its title, which plays on the conventions of real bird names, and many of Parker's titles are funny. Here we see a lone, one-legged sentinel on what looks like a coastal rock, keeping its squinty eye out for signs of approach. But its ability to see is illusory. The bird's eye is just a screw at the base of a blade from a pair of clippers--a rather long, decurved blade from a nasty-looking pair of clippers. The antenna, perhaps, takes in more useful information than the eye? 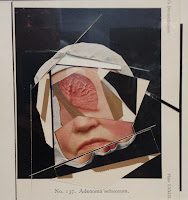 Scott Wilson's work is also slightly disturbing, but in a different way. Made largely from illustrated medical texts, the collages are interesting for their formal qualities of composition and attractive for their combinations of pinks and beige and palest orange--the colors of flesh and viscera. But many of the images used illustrate pathologies, so this is diseased flesh we are looking at. Collage titles name the diseases. Wilson presents his odd combinations as if they are plates in an actual text--deformities to be studied, learned from, repelled by. Abstract shapes often overlay or augment the human body parts suggesting early 20th century Russian abstraction. As a child, I remember being given an encyclopedia of the insect world. It was a very thick volume. I don't remember the text, but the plates were photographic and numerous. Each plate was an array of related insects--bizarre insects, large and small. Round beetles, oblong beetles, elongated beetles. Beetles with antennae longer than their bodies. Grasshoppers of every description. Walking sticks. All in black and white. Repellent yet fascinating at the same time. I spent hours looking at that book. I was immediately reminded of it when viewing Wilson's collages. They are likewise simultaneously fascinating and repellent.

Hammerfriar Gallery is at 132 Mill Street, in Healdsburg. The "Ain't Natural" show will run through June 22. Well worth a visit.
Posted by Colin Talcroft at 8:17 AM