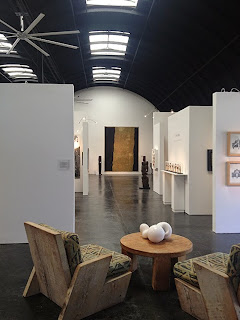 On the same night as the opening of "Aint Natural" at the Hammerfriar Gallery, Paul Mahder Gallery* opened a retrospective of work by John Anderson (1932-2011). Anderson is a new artist to me, although he appears to have a solid reputation. He was long the assistant of painter Gordon Onslow Ford, early a surrealist but later occupied with depicting inner realms of consciousness and trying to escape from what he seems to have seen as the tyranny of the visual. Ford was mentor to Anderson and Anderson's work shows a similar concern with capturing expressions of inner consciousness.

I'm always suspicious of art that seems to rely heavily on theory or that claims to be entirely spontaneous and unguided. The idea of representing inner consciousness without reference to the visual is an intriguing one, but is it really possible? What does consciousness look like? The surrealists looked to dreams for images of the unconscious, but that approach was inherently contradictory; dream images are recalled images from waking life (which isn't to say surrealism didn't yield some good art). Ford and Anderson apparently wanted to directly depict a world beyond consciousness—Ford emphasizing speed and spontaneity, Anderson taking a more deliberate approach, at times trying to work in a trance-like state. 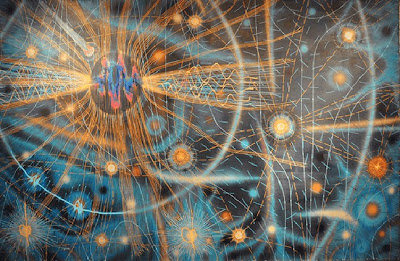 What does inner consciousness look like according to John Anderson? Inner consciousness appears to be crackling with radiating energy and filled with particles—points, tiny circles, dots, blobs. Read the dots as stars and the images evoke the infinite. Read them as subatomic particles and they evoke the infinitesimal. Much of the appeal of Anderson's work comes from this ambiguity; are we floating in space or are we on Jules Verne's fantastic voyage? 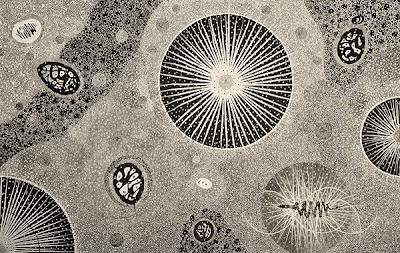 Another ambiguity is created by the way Anderson's visual vocabulary simultaneously evokes physical phenomena on the one hand, living creatures on the other. We see lines radiating from a bright spot and surrounded by a field of dots; rings of increasing size as they move away from a point of apparent origin; wave forms; star clusters; entire galaxies; lines that suggest the tracings of subatomic particles in a particle accelerator; electrostatic charges in a Van de Graaff generator; excited plasma; electron flows. All these images come to mind. Some of the paintings put me in mind of Dr. Frankenstein's lab equipment (or at least the Hollywood depiction of his lab equipment). At the same time, it's easy to see the circles filled with radiating lines as diatoms or pollen grains greatly magnified. That is, much of Anderson's imagery is as suggestive of microscope views of living things as it is of physics experiments. Volvox, an old friend from high school biology class, is here. Cells and their nuclei and fields of protoplasm are here, some with embedded mitochondria and with vacuoles. The double helix of the DNA molecule is here.

The paintings by Anderson in the new Paul Mahder show seem to make abundant reference to the visual—specifically to the visual language of physics and biology. Thus, I wonder how successful Anderson can be said to have been at escaping the conscious, the visual. Perhaps it doesn't matter. I don't belittle the attempt. The process is important, and the art that resulted from years of effort toward achieving a goal (however elusive) is compelling. John Anderson at Paul Mahder Gallery will be on display through June 2015 (the gallery website does not give an end-date in June). Well worth a visit for the John Anderson work and a great deal of other good work in this very large display space.

Posted by Colin Talcroft at 3:48 PM