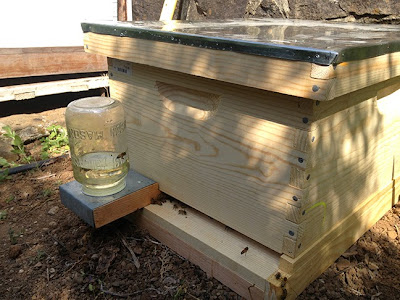 Our bees swarmed yesterday. Rather conveniently, they initially landed in an accessible place in our next-door neighbor's yard. It was fairly easy to get them into a box and seal them up for the night. I was going to try to sell them (a swarm of bees goes for about $100 these days), but, with no immediate takers on Craig's List, I went down to Western Farm Center in Santa Rosa and got a basic hive set-up to give them a home at least temporarily. I may sell the whole shebang if someone's interested. I may keep them. For the moment, anyway, we now have two beehives. I'm giving them a little supplemental food (the sugar water feeder visible in the photo) to get them started. It's amazing how quickly bees will settle in to a new space. They start drawing comb almost immediately. Bees line up at the entrance fanning their wings, spreading the queen's pheromones, encouraging stragglers to come into the hive. I cut the swarm from a half-dead juniper. Inevitably, pieces of the tree got mixed up with the bees. Within minutes, housekeeper bees were pushing debris out from the front of the hive box. They're behaving as if they never left home. Next task will be to paint the exposed wood areas.
Posted by Colin Talcroft at 10:58 AM