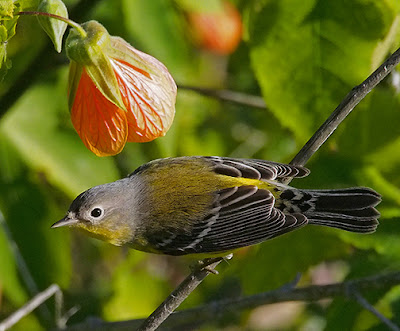 A stray Magnolia Warbler has been hanging out at Diekmann's Bay Store, in Bodega Bay. Magnolia Warbler (Setophaga magnolia) is normally an Eastern species not found here. Once in a while a young bird will get lost west of the Rockies during its first migration south. I went to have a look and was lucky enough to get a good photograph of the bird. Warblers are such frantic foragers that I always feel lucky to capture one in focus (above).

A few days later I went again, but was unable to find the bird. I did, however, see a Nashville Warbler (Setophaga ruficapilla), also unusual here (although much less so). The birds can look similar in some plumages. Both have a complete white eyeing, a grayish head, and are otherwise greenish above and pale yellow below, but I knew this to be a Nashville because  of a number of differences--notably the lack of patterning in the wings, lack of a yellow rump, and the lack of the black and grey scalloping at the base of the tail present in the Magnolia Warbler (above). From underneath, it was all yellow except for a white patch at the base of the legs, which is typical of a Nashville (below). 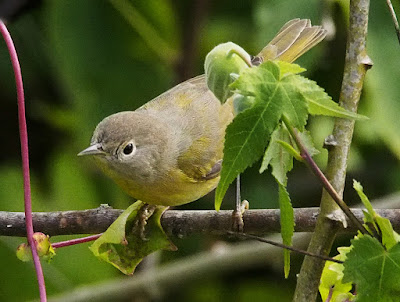 For more about birds and birding in Sonoma County, see my Website: Sonoma County Bird Watching Spots.
Posted by Colin Talcroft at 3:39 PM