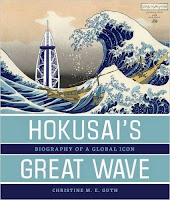 I've just finished reading two new publications from University of Hawaii Press, both about Japanese art. Hokusai's Great Wave: Biography of a Global Icon, by Christine M. E. Guth, examines the history of response to Hokusai's print Kanagawa Oki no Namihira [Beneath the Wave off Kanagawa], better known today as The Great Wave, from its 1831 publication as part of Hokusai’s Thirty-six Views of Mount Fuji to the present day, and then looks at how the image has been adopted and repurposed since then. The book's approach is mainly descriptive, aiming to show the breadth of the image’s influence. Guth doesn’t dwell too deeply on the question of why The Great Wave has become the most widely recognized non-Western work of art in the world and perhaps the most recognized work of art of any kind after Da Vinci's Mona Lisa.

The themes are diverse, and appropriately so, as the central truth that emerges from Guth’s writing is that The Great Wave has been extraordinarily adaptable, particularly in a commercial and artistic context, where it’s been used to add cachet to package design and advertising, to decorate everything from éclairs to wristwatches, and as a backdrop or pictorial element in both high art and parody. It’s been called upon to represent the power of natural forces generally and, the struggle between man and nature more specifically. It has been taken to symbolize a temporal dichotomy—with Mount Fuji in the background standing for timelessness, the wave for the ephemeral. It has been used as a stand-in for Japan and, by extension Asia, although Guth points out that the print’s use of European illusionism and the then-modern Prussian blue likely would have given it a foreign and exotic appeal to Japanese viewers at the time of its initial appearance.

While simply adding a dash of Japanese flavor is sometimes the goal of these commercial and other applications, just as often the aims of those adopting Hokusai’s wave image seem vague and hard to pin down. The Great Wave remains a symbol of Japan but at the same time a powerful and ambiguous icon easily divorced from its geographic origins, referenced as often as a signifier of abstract ideas as of anything specifically Japanese. Ultimately it is perhaps this elasticity of meaning that has allowed—and continues to allow—its many transformations. 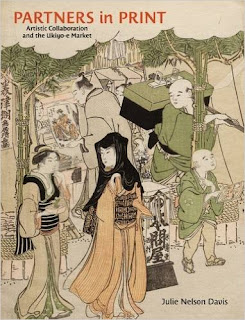 Julie Nelson Davis’s Partners in Print: Artistic Collaboration and the Ukiyo-e Market is a more focused volume. Although it takes the form of close—almost archaeological—studies of four disparate publications and looks at their differing collaborative configurations, her carefully researched book uses each of the four studies to make the same point—that creation and consumption of artworks in the Ukiyo-e tradition were highly collaborative processes.

Davis examines a specially commissioned print featuring a work by painter Sekien, a teacher to both Utamaro and Sekichujo, to look at relationships between a teacher and his students. She examines a full-color printed guidebook to the Yoshiwara entertainment district in Edo, complete with reviews of the prostitutes and their establishments, focusing on relationships between painters, a publisher, the brothel operators, and tsu (those in the know—in this context, veteran frequenters of the pleasure quarters, the idealized assumed reader). She reveals the nuances of an erotic printed scroll, examining ties between the scroll’s designer and its publisher. Finally, she looks at a popular illustrated satire in book form, illuminating the interdependence of the book’s writer and its illustrator, at the same time shedding light on how publishers and government censors interacted in late eighteenth century Japan. She sees each of her examples as a “material record of dialog,” and she is expert at teasing out meaning from the smallest details of these works. Partners in Print is valuable not only for the convincing clarity of its central argument but also for the author’s masterful explication of each of the works she examines so closely. Partners in Print is likely to be of special interest to students of Japanese art history but of interest to any reader with more than a passing interest in Japan, art, and the sociology of art.
Posted by Colin Talcroft at 4:33 PM