Books I'm Reading: The Hare with the Amber Eyes 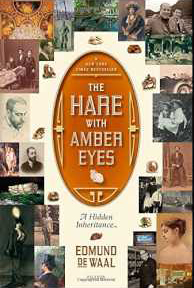 Edmund de Waal's The Hare with the Amber Eyes appears to have been a best-seller when it was new. I received it long ago as a gift but read it only recently. It's an extraordinary tale expertly told. I can see why it was popular. De Waal is the current custodian of a remarkable collection of more than 260 netsuke that has been in his family since his relative, one Charles Joachim Ephrussi, acquired it whole in Paris during the late 19th century, a time of intense interest in Japanese art there among the wealthy and knowledgeable. Charles and the Ephrussi family as a collection of people are as interesting as the netsuke and De Waal is expert at introducing them to the reader as he investigates his ancestors and traces the history of the collection he now owns.

The collection moves from Paris to Vienna, following the family fortunes--where it narrowly escapes confiscation by the Nazis--and then to Tokyo by the 1960s, in a kind of homecoming, owned by a great uncle of the author, who now houses the collection in England. The earliest section, about Paris, is especially interesting for the picture it paints of the artists and writers Charles Ephrussi associated with.

A first-rate story beautifully told. My only complaint is that the edition I read (Picador, 2010) frustratingly has no illustrations of the collection, or even of the several special netsuke the author repeatedly mentions--the hare with the amber eyes among them. I've heard, however, that there are fancier editions available that are better illustrated. Still, highly recommended.
Posted by Colin Talcroft at 1:52 PM