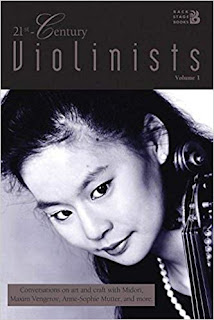 Having recently read Violin Virtuosos a volume that followed 21st-Century Violinists (String Letter publishing, 1999), I received this book, the earlier of the two, as a thoughtful Christmas present. Like the later book, this one is a collection of interviews with prominent violinists that originally appeared in Strings Magazine. There also appears to be a 21st-Century Violinists Volume 2--which I haven't seen or read--presumably in the same format, a collection of interviews from the magazine (although I can't find this in a search; perhaps the book mentioned on the back of the first volume became Violin Virtuosos, the book I read first?).

This volume includes talks with Corey Cerovsek, Sarah Chang, Pamela Frank, Nigel Kennedy, Midori, Anne-Sophie Mutter, Elmar Oliveira, Nadja Salerno-Sonnenberg, Gil Shaham, Isaac Stern, and Maxim Vengerov. As before, some of these names are very familiar--Stern, Chang, Kennedy, Mutter, Midori, Salerno-Sonnenberg, Shaham, and Vengerov--all of which I've heard live except for Stern, Kennedy, and Vengerov. Cerovsek, Frank, and Oliveira were entirely new to me. I see that all three were in the news when this book was published and they were actively recording at the time, but they seem to have faded away.

Oliveira has recorded some obscure works that look interesting (I just ordered a used copy of his recording of Finnish Composer Einojuhani Rautavaara's Violin Concerto). Pamela Frank seems to have done a lot of chamber music with the likes of Yo-Yo Ma, Emanuel Ax, and Edgar Meyer, so I imagine she's good, but she's not been on my radar at all. Corey Cerovsek doesn't seem to be very active at the moment, judging from a search of recordings. Part of the fun of these books is reading the views of known performers when they were much younger, talking about performing and recording, but just as much fun is being introduced to new performers to explore. These books will be of interest to any serious classical music lover with a particular interest in the violin. 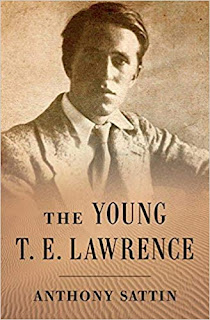 The title is a trifle misleading. The book doesn't really deal with the young T. E. Lawrence. You might say it deals with the younger-than-we-usually-hear-about T. E. Lawrence. The book starts with a scene in 1914, when Lawrence was already 26, before jumping back to 1909 (when he was 21) and then briefly to the 1903-1908 period (15-20), but most of the book concerns the years from 1909 to 1914. That said, in very readable prose, Sattin paints a vivid picture of a younger Lawrence already exhibiting many of the character traits that led him to pursuits that prepared him for his later role in the Arab Revolt--traits that also brought him to the attention of people who facilitated early travels and archeological digs that likewise prepared him for his later, better known activities in the Middle East. The man Lowell Thomas sensationalized as Lawrence of Arabia is already clearly present here. A very enjoyable read. Highly recommended.
Posted by Colin Talcroft at 1:14 PM