On the road: Goodbye Ohio--almost 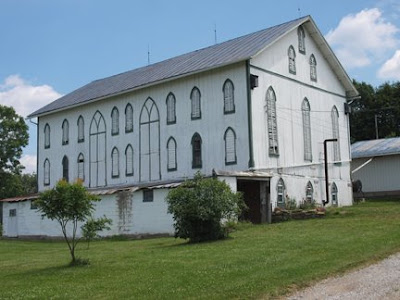 Haven't been able to write much because of work. I've been stuck in my hotel rooms in the morning the last two days. Since I last wrote, I've been mostly in Oberlin, where I stayed last night. I went to Oberlin in the hope of seeing a copy of a little booklet of views of the Oberlin campus that my Grandfather, Warren R. Laity, published and illustrated with his own photographs, but Oberlin doesn't have a copy. I remembered there was one at the Ohio Historical Society Library in Columbus, so made plans to go home through Columbus. I was also hoping to see the Columbus Museum of Art, but work got in the way. I'm now having a late dinner in Centerville (decent Mexican), hoping to get as far east as I can tonight.

I enjoyed seeing the campus at Oberlin. Judging from the photographs in my Grandfather's publication (which I saw and copied this afternoon), it hasn't changed much since he was here, in 1923-24. I especially enjoyed the art museum on Campus. It's a small space, but the quality of the work is excellent. The large addition was closed for renovation. I assume they usually show more than what I was able to see, but there was an interesting special exhibit of German Expressionists and one of Japanese prints as well. As a souvenir, I picked up an Oberlin T-shirt. Stayed at an inexpensive B&B in Oberlin.
I didn't get back to Columbus until 4:00PM, but the OHS is open late on Thursdays, which was lucky. Actually, it's closed on Monday, Tuesday, and Wednesday, so it's very lucky I hit it. I found and had them copy the book of views of Oberlin and also found some family records in their collections while I was waiting. The OHS is huge. I had no idea. You could spend a week in the place looking things up. Wish I had known when I lived nearby.
Then headed south and east, hoping to make some headway. I was hoping to see Corinne, my old friend from Japan, in Dayton, but it didn't work out. I have no idea where I'll stay tonight, but I suspect I'll stop driving earlier rather than later.
Posted by Colin Talcroft at 6:34 PM