On the Road: Dayton and Columbus, Ohio 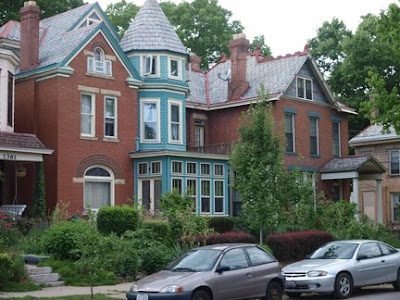 In Dayton, spent the evening last night with friends from high school and college. It was a lot of fun to see them again after about 12 years, and nice to be among friends for the first time in many days.

This morning I ran over to Woodland Cemetery to see the family plot. I cleaned off the stones a bit, but everything was in order. Now that some time has passed, the broken stone cross doesn't look that bad. I left a few flowers at my Grandma's grave and sent her greetings.
I drove around a bit, but really didn't look at much. It was rather sad. So much of the area I knew is run down and overgrown. I did go to the old house. It's for sale. It looked empty, or as if someone was camping out on a mattress in the living room. The redbud tree I planted all those years ago is giant. The plum tree has been cut down. There were many shoots from where it stood, but I couldn't pull one with roots. So, I guess my quest over the years to get one going in a yard of my own is hopeless. Too bad. I drove by the Forrest Avenue house in which my Grandmother was born. It looks in good shape. It's been painted red, but someone seems to be keeping it up.
The downtown area looks very different. The arts center looks good, but I just drove by it. Without Rike's being there, it was very hard to get my bearings. Looking at things was rather depressing, so I moved on quickly. I went to the Dayton Art Institute, but it had closed already. So, I missed that. It's a small collection, but there are some things there I like very much and wanted to see, so that was a disappointment. I particularly remember a small painting of Charleston harbor (I think) in a beautifully hand-carved frame that I had looked forward to seeing. There's a good Hopper, a small Modigliani portrait, and a fun Bouguereau. I remember those at least.
It was a short drive to Columbus. I arrived at about 6:00PM. I spent an hour or so walking around my old neighborhood, on Highland Street and King Ave. (photo above). The houses are still very interesting. I'd like to spend a month here, drawing them all again. There just isn't time on a trip like this. The church on the corner of King is now an Eastern Orthodox church, otherwise little has changed. The trees are bigger. It was fun to see some of the places in my old drawings. The Ohio State campus, however, has changed quite a bit. There has been a lot of new construction. Also, the area called the Short North, which is just north of downtown and well south of campus, has been developed to an extraordinary degree. It looks attractive now.
I found a hotel north of campus. Tomorrow I'm going to have lunch with Jon, a friend from high school that lives in Columbus now, and then I plan to head north, to Honeytown, initially, which is where my friend Scott's family farm is. He's offered to put me up. It should be a good base for a night, or perhaps two, to visit Millersburg and Oberlin. After that, I plan to head home as quickly as practical. It's been fun, but rather tiring after 3,000 miles and with the thought that there are at least that many miles still ahead of me. That said, I am well. I hope everyone at home is too.
Posted by Colin Talcroft at 5:44 PM