On the road: Millersburg and Winesburg, Ohio 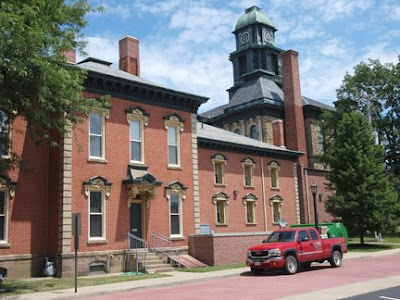 Worked in the morning, but spent most of the day with Scott driving around Millersburg and Winesburg, Ohio. I went to the library in Millersburg and looked through the genealogy library, mostly marriage, probate, obituary, and cemetery records. I found records for all the people we already know about and some others, which may or may not be relatives. I went to the Millersburg Oak Hill Cemetery. I found the graves of Godfrey Heinig, Ernestine Heinig (as the stone reads), and right beside them a Julia A. Heinig, which must be a relative, but that’s a name I’ve never seen before. According to the stone, she died on Dec. 19, 1903 at 50 years, 5 months, and 24 days, which would mean she was born around 1853. There are two other Heinigs in the cemetery, in different plots, that probably are not connected with us—oddly, both Julius Heinig.


The records showed that Abraham Kratsch and his wife Caroline are buried in Winesburg, in the old cemetery behind what is now Zion Reformed Church. Sadly, about 70% of the monuments were made of a very soft stone and they are entirely unreadable. I DID, however, find Abraham’s stone—barely legible—but, it definitely says “A. Kratsch.” There is a nearly identical one next to it that I have to assume is Caroline, but I couldn’t really read it. Both stones are at the back of the cemetery (furthest from the church, on the left with the church behind you). I asked around town, and I was told that records from the church have all been lost, so there’s nothing to be found there. Two Amish women in a store suggested I talk to the local historian, one Glen Wengerd. I found him and he took down the information and offered to see what he could find. Maybe that will turn up something.


I talked to a librarian at Oberlin today, too. I plan to go there tomorrow. She said they have a student file on my grandfather, Warren R. Laity (and Harold, his brother) that I can see, but they don’t have a copy of the Oberlin Campus Views book I was hoping to find. There appears to be a copy at the Ohio Historical Society Library in Columbus. I may swing back there on my way home. I plan to start back tomorrow.
Posted by Colin Talcroft at 8:49 PM