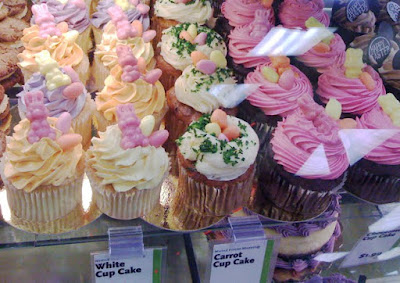 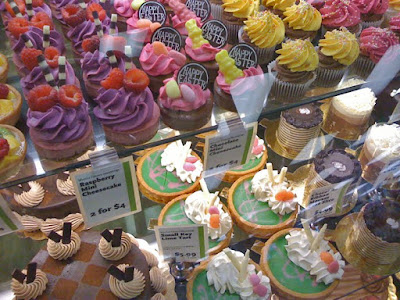 Cupcakes are taking over the world! Well, not really. But I see and hear an awful lot about cupcakes these days. When did cupcakes go from being a school birthday party staple to a gourmet offering? Is this one of those transformations that happened while I lived in Japan all those years? Why am I just noticing?

I have mostly bad memories of cupcakes. Those birthday party cupcake trays were usually studded with cupcakes from an off-the-shelf mix that somebody's mom didn't really want to make. No love in that.

Cupcakes seem to have followed the same trajectory as jelly beans, chocolate, and soda water. Marketing (and some dedicated and creative enthusiasts) have transformed these once ordinary products into fancy specialties with myriad variations. There are bakeries devoted entirely to cupcakes these days. Am I way behind the curve on this one? I think so. I guess it's time I tried a gourmet cupcake instead of simply enjoying the pictures I keep seeing. Luckily, I just got a coupon for two free gourmet confections of the cupcake kind from Sift, a Cupcakery, in Santa Rosa, as a thank-you from KRCB Radio for renewing my membership (and also two tickets to attend West Coast Live in person--and two CDs to boot).

The tasty-looking mini-cupcakes above are baked fresh each day at my local Whole Foods, on Yulupa Ave., in Santa Rosa. They're decorated by the lovely Megan and others. Megan used to be out front, by the display case making coffee and hot chocolate for people. About a year ago (longer maybe?) someone seems to have discovered she has quite a talent for decorating cakes, and cupcakes, and tarts. Now she works in the inner recesses of the bakery and we get only an occasional glimpse of her. She and the rest of the bakery staff make wonderful treats, but I miss seeing her smiling face.
Posted by Colin Talcroft at 6:18 PM