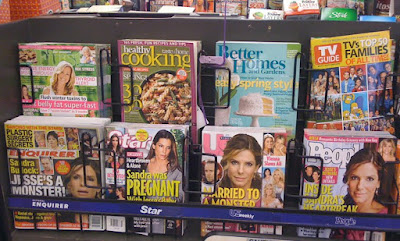 In the checkout line at the supermarket yesterday I found myself staring at the usual racks of magazines and candy as I waited for my turn. There in front of me was poor Sandra Bullock on the cover of four gossip magazines. I guess it's a big story in the world of gossip magazines. I think they should just leave her alone.

Three goals by the same player in a hockey game is called a "hat trick." Everyone knows that--but what do you call it when a player scores four goals in a game? Apparently, it's called a "Texas hat trick." You know, a little bigger than a regular hat trick? Learn something new every day.
Posted by Colin Talcroft at 8:04 PM