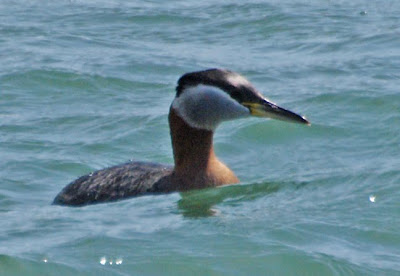 Warning: This is a post only a bird watcher could love.

I spent the morning today, April 1, out at Bodega Bay, bird watching. It's a time of transition. Overwintering birds are starting to leave. Spring migrants are beginning to arrive. Birds are moving from winter plumage to breeding plumage. Today I saw four birds I've been trying to see for some time, so it was a good day; I got clear, unambiguous views of a White-Winged Scoter, a Red-throated Loon, a Glaucous-winged Gull, and a Red-necked Grebe in breeding plumage (top photo).

At Bodega harbor, I saw Surf Scoter, White-winged Scoter, Western Grebe, Hermit Thrush, Band-tailed Pigeon, California Towhee, Hutton's Vireo, Osprey, European Starling, Brewer's Blackbird, Red-winged Blackbird, House Finch, Turkey Vulture, and Horned Grebe. On the way home, passing by this point, there were about 350 Marbled Godwits (lower photo; the fellow with the two-tone bill), many Willets, Western Sandpipers, and a Dunlin or two, with at least one in breeding plumage (lower photo; the Dunlin is the bird with the black spot on its belly).