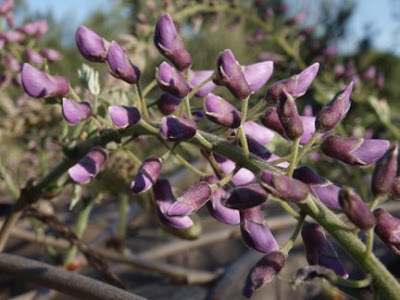 The first blooms opened on the wisteria today. As usual, only one or two have opened. It will be a week or so before the plant is in full bloom and the air is thick with the sweet, root beer-like scent of the flowers. They are a favorite of our big, very loud bumblebees. Lying in the hammock, reading in the early spring can be rather noisy. If it gets too noisy to concentrate, I just put down my book and go to sleep....

This wisteria was grown from a seed collected in Imari, Japan in 1999 or so. There is a plant on either side of the arbor that supports the hammock. So far, only one of the two has bloomed. I had hoped to see the color of the second one this time around, but it looks like I'll have to wait at least another year. The parent plant was a wonderful, deep pink. This one, while pretty, is closer to the usual purple color. I still cling to a hope that the other one will be pink. The wisteria bloomed on April 4 in 2009. A year according to this plant was thus 359 days.
Posted by Colin Talcroft at 5:04 PM