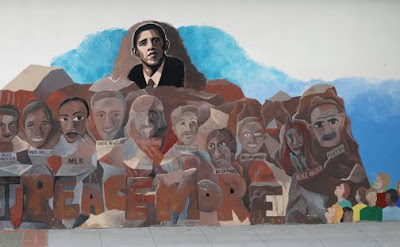 I came across this today at A.P. Giannini School, in San Francisco. My photograph makes it hard to judge scale, but the mural is about 40 feet wide and more than 15 feet high. It's been there for years, but it's sprouted a portrait of President Obama since I last saw it, head and shoulders above the other denizens of "Mt. Peace-more." I don't think this needs much comment, but it interests me on a number of levels. It's interesting that an addition was made to the original mural, it's interesting that the Obama bust is positioned to dominate so completely, it's interesting that the portrait has been copied directly from Shepard Fairey's poster of Obama that was itself copied--without attribution--from a photograph of Obama by Mannie Garcia. As Vladimir Nabokov once said "Everybody loves a metamorphosis"--or something to that effect.
Posted by Colin Talcroft at 11:30 PM