I spent a very busy weekend escorting friends of friends around wineries in Napa and Sonoma, so I'm tardy in reporting what started blooming yesterday in the garden--four new plants.

First blooms on the orange-yellow butterfly bush with globe-shaped flower clusters (Buddleia globosa). I believe it is called "Sungold." This is a plant I found at one of the plant sales at Strybing Arboretum in San Francisco. It has done well here. It suffers toward the end of our dry summers, but it can be cut down to about 18 inches at the end of the season and it comes back very strongly in the spring--like nearly all of the butterfly bush (Buddleia) varieties. This one is striking for both its color and the round flower clusters. Most Buddliea come in whites, pinks, and purples. I don't have a record of this coming into flower in 2009. 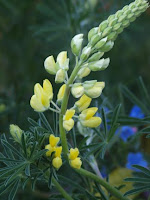 The yellow bush lupine (Lupinus arboreus) had its first flowers of 2010 yesterday. This is a wonderfully fragrant large lupine (up to about six feet across and usually four to five feet high--although it takes well to pruning). I fell in love with it many years ago out at Bodega Head where I first saw hundreds of them. They are beginning to come into flower right now out at the coast as well. A little bit of the seaside in the back yard. Last year this plant first bloomed on April 26. A year according to Lupinus arboreus was thus 371 days. This plant is also referred to as Lupinus arborescens. I don't know which is correct.

Purple todflax (Linaria purpurea) is starting to bloom all over the garden. I bought two of these about three years ago. I let them go to seed. They sprout like weeds all over the place. I pull the ones that come up in inconvenient places and leave the rest. There is a pink variety as well. They are both pretty enough that I'm content to put up with their weedy ways. I didn't record the first blooms on this plant in 2009. 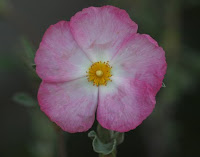 The rock rose "Silver Pink" (Cistus aureus) starting blooming yesterday as well--although I'm not entirely sure this is the right name. I seem to have lost track of the names of many of the rock rose species in the garden (there are at least eight). There are many hybrids and sometimes multiple common names for the same plant; it can be confusing. This one--whatever it is--is very attractive, but the plant hasn't been all that robust. It remains fairly spindly. I've had trouble getting it to fill out. Most of the rock roses are pretty much maintenance free. This one has required a little pampering. Perhaps it doesn't get quite enough sun where it is right up agains the side of the house.... I don't seem to have a record for this plant in 2009.

The garden is probably at its best right now. Hundreds of plants are in bloom. There is something in every corner. Because of the late rains, everything still looks fresh. I wish I could show it to you.

I write about many subjects, not just the plants in my garden. Try the tabs at upper right to explore other topics.
Posted by Colin Talcroft at 11:00 AM