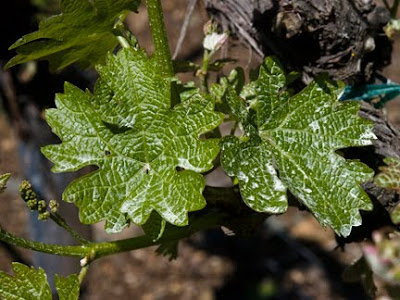 This morning I finally had the opportunity to spray the grape vines with sulfur to prevent mildew. The forecast is now for clear skies for at least a week. The longest shoots on the Sangiovese vines are already about 18 inches long. The longest on the Cabernet vines are about six inches long. Spraying with sulfur is the one tedious chore involved in making wine. I enjoy just about everything else. It has to be done though. The vines will need to be sprayed again in another couple of weeks, as new growth becomes vulnerable. In the photo you can see the sulfur on the leaves. A tiny grape cluster is clearly visible a well.
Posted by Colin Talcroft at 11:59 AM