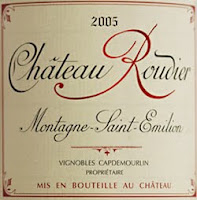 Last night I tasted the 2005 Château Roudier Montagne-Saint-Émilion. The appellation Montagne-St.-Émilion is one of four surrounding St. Émilion proper allowed to append "St. Émilion" to their own names. The wines of the St. Émilion satellites can be solid (I've had the best luck with those from St. Georges-Saint Émilion), but they rarely have the power and finesse of wines from St. Émilion itself and the nearby Pomerol--or even from other "small" appellations on the right bank of the Dordogne, such as Fronsac. 2005, however, was the kind of year that favors even the smallest, unsung producers. I'm always on the lookout for tasty, inexpensive wines from that year, hoping to repeat the many successes I had finding wonderful little wines in 1989 and 1990--especially because most of that wine is gone now.

The 2005 Château Roudier Montagne-Saint-Émilion was an appetizingly deep red with a hint of garnet. It looked neither young nor old. The nose was suggestive of flowers and perfume with hints of leather immediately coming up out of the glass. Swirling the wine brought out considerably more--cherries and licorice, and hints of barnyard and violets. The violets, in particular, persisted.

The wine was initially rather harsh on the palate--quite tannic and closed, but it did have some ripe fruit pushing through. I decided to decant it to let it open up. (If you buy this wine, I recommend doing the same.) There was a very light deposit in the bottle, but I decanted the wine mostly to give it air. With air and a little time, some nice cherry flavors developed and later I began to detect scents of vanilla and oranges along with the violets. While the tannin fell away to reveal some nice fruit flavors in a clean, compact package rounded out by sweet tannins on a shortish finish, the wine was rather low in acid, which made it begin to seem a bit flat as soon as the tannic bite moderated a little. I enjoyed the wine for its flavors of cherries and (later) very ripe plums and for lingering suggestions of violets that made it seem something like a well-made Côtes-du-Rhône, but it lacked the balancing acidity a wine needs to continue tasting fresh and alive. I suspect that this will not be a long keeper (on the following day, it tasted very flat indeed). It may be at its best now, decanted. Fairly priced at Trader Joe's at $12.99 a bottle, but I probably won't go back for more of this. Then again, I might.

I write about many subjects. Use the tabs at upper right to explore other topics. For more wine reviews, use the "Wines I'm Drinking" tab.
Posted by Colin Talcroft at 3:59 PM